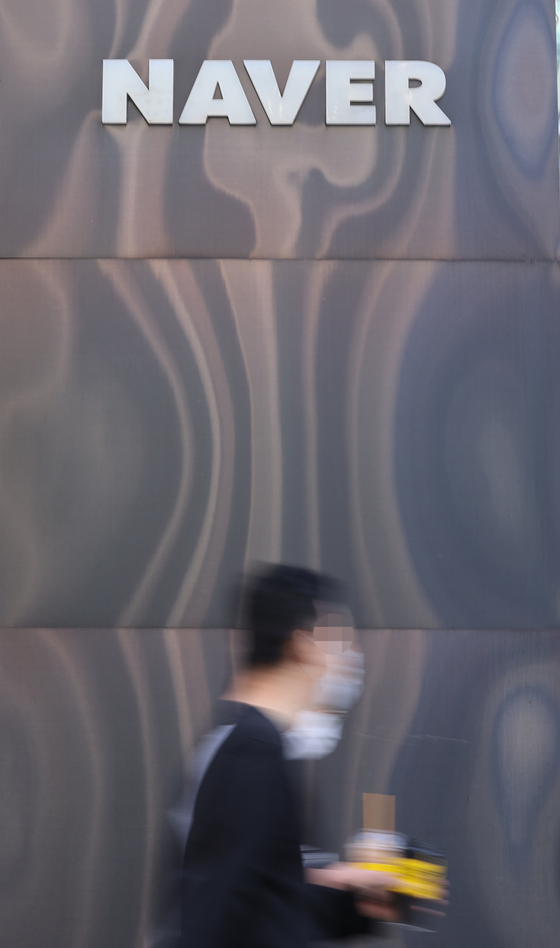 Naver's headquarters in Bundang, Gyeonggi on Tuesday. The Korean IT giant is fined by the antitrust agency for manipulating its algorithm to benefit its services. [YONHAP]

Naver was fined 26.7 billion won ($23 million) for changing its algorithm to promote its own services — such as shopping and Naver videos — over those of its competitors.

It was the first time the Fair Trade Commission (FTC) fined an online platform operator for changing its algorithm to squeeze competitors.

According to the FTC on Tuesday, Naver changed its algorithm at least six times between 2012 and 2015 so that the products sold on its Smart Store e-commerce site would be listed at the top of searches. Products offered by competitors including 11st, Gmarket and Interpark were in less prominent positions.

Naver has been offering a service that allows customers to search and compare the prices of products sold online since 2003. The online shopping search engine's name was changed to Naver Shopping in 2015.

Its own e-commerce platform was launched in 2012 and rebranded as Smart Store in 2018.

There have been growing concerns over Naver’s dominance in e-commerce because it runs an online shopping search engine and its own online store.

Naver dominates the online shopping search market in Korea with a 70 percent market share, far above competitors such as Kakao, Danawa and eNuri.

Major changes in algorithms were made in 2012 before the launch of the e-commerce platform and in 2015, when the IT giant launched its online payment service Naver Pay. Products that are sold via Smart Stores can be paid for via Naver Pay.

According to the FTC, 300 products are listed in search results when accessing Naver Shopping.

The top 120 products are chosen through a special algorithm that favors Naver's own shopping platform.

The watchdog agency found that Naver frequently monitored how the algorithm worked to boost the sales of products on its e-commerce platform.

As a result of the changes, products sold via the competing platform such as 11st and Gmarket were pushed at the bottom of the list.

As an example, the FTC went back to July 2012. At that time, 15 percent of the products on the first page of search results were from Naver’s own e-commerce platform. By December of that year, the percentage was raised to 20 percent.

As a result of manipulation of search results, according to the FTC, the market share controlled by Naver's online shopping platform has risen from 4.97 percent to 21.08 percent from 2015 to 2018.

An additional 200-million-won fine was slapped on the company for changing its algorithm to promote videos from Naver TV at the expense of competitors Afreeca TV and Pandora TV.

When it overhauled its video search algorithm in August 2017, Naver didn’t inform its competitors, which gave Naver TV time to make adjustments to improve its results on searches.

“At a time when non-contact transactions are growing rapidly [due to the global pandemic], we expect [the penalty on Naver] will contribute to establishing fairer competition on transactions online while protecting consumers’ right to choose,” said an FTC official.

Naver argued that the changes to its algorithms weren’t meant to obstruct competition. It argued the changes were made to increase the exposures of small merchants selling unique products via its e-commerce platform.