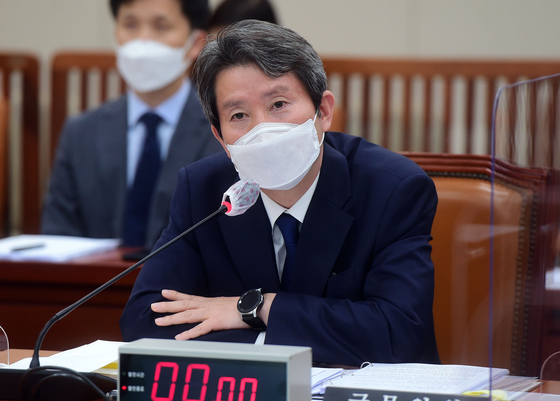 During a parliamentary audit hearing at the National Assembly, Minister of Unification Lee In-young presented a somewhat different forecast from Seoul’s military officials — as well as his own ministry — of what lay in store during Pyongyang’s big event Saturday, for which the regime has been preparing for months.

“In the past, ahead of a U.S. presidential election, and to show off its nuclear or missile capacities, [the North] would actually fire or test [missiles],” Lee said. “But this time, we are getting indications that [Pyongyang] will conduct something on the level of lower intensity acts or shows of force.”

Lee did not elaborate on what he meant by “lower intensity,” but according to his own ministry’s report to the National Assembly, Pyongyang was likely to unveil a new “strategic weapon” it has warned about for months, which could range from a new form of an intercontinental ballistic missile (ICBM) to a submarine-launched ballistic missile.

A similar prediction was made a day earlier by Seoul’s Minister of National Defense Suh Wook, who expressed agreement with a lawmaker’s assertion that the North was more likely to display a new missile than conduct an active provocation in the form of a weapons test.

Pyongyang has often used its grandiose military parades in Kim Il Sung Square to show off the latest additions to its ever-expanding missile arsenal, most notably with the unveiling of its Hwasong-15 ICBM in February 2018.

Those displays, according to the Unification Ministry, may be attempts at “underscoring [the regime’s global] sense of existence amid showing a lackluster economic performance” this year.

This year’s event is expected to be particularly momentous for the North, given that it marks the party's 75th anniversary and comes as leader Kim Jong-un enters his 10th year in power. The occasion may be a way for the regime to relay a long-awaited message abroad after months of focusing on domestic troubles like typhoon relief and antipandemic activities.

“North Korea after the party foundation ceremony will search for a strategic response plan for inter-Korean and North Korea-U.S. relations,” the ministry report added.

“The outcome of the U.S. election will determine the tone of U.S. policy toward the North, such as whether negotiations resume or a period of readjustments continues.”

The regime itself made clear in earlier statements it was closely watching U.S. President Donald Trump’s re-election contest against Democratic Party nominee Joe Biden, and that it would adjust its attitude according to the result.

For its part, South Korea will continue efforts to restore communication lines with the North severed by Pyongyang’s escalations over the summer that culminated in its unilateral demolition in June of the inter-Korean liaison office in Kaesong.

The ministry also addressed last month’s killing of a South Korean fisheries official by the North in its waters, calling it an “inhumane act.” Defense Minister Suh on Wednesday also criticized the North’s response as inexcusable, but said the South’s military initially saw little indication the official would have ended up in North Korean waters when he was first reported missing.

The incident, which continues to rile debate in Seoul about the government’s response, has apparently dampened the Unification Ministry’s willingness to pursue exchanges with Pyongyang. On its agenda for the time being, the ministry reported it would take a “cautious” approach to cooperation with the North, though it would continue efforts to realize Lee’s plan of “small-scale” barter trades across the border.