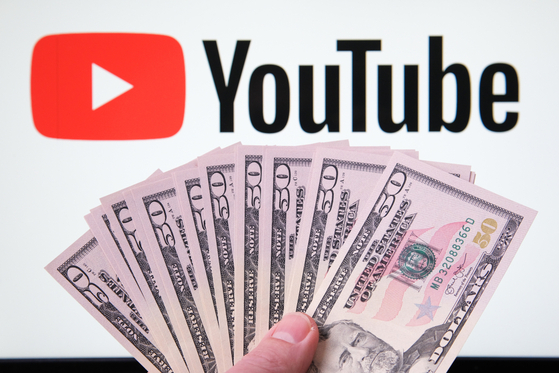 
The average monthly salary of YouTubers in 2019 was 9.34 million won ($8,041), three times the average for a regular office worker in Korea. A majority of that income came from corporate sponsorships, not from advertising on the platform.

The National Tax Service (NTS) on Tuesday submitted a report to the office of Rep. Bak Hong-geun from the ruling Democratic Party (DP) regarding the registration status of new content creators on YouTube and their income in 2019. This is the first time that revenue specifics have been disclosed.

The NTS last September created a new industry code for YouTubers and started to receive registrations, leading to the disclosure of their revenue.

Currently, there are 691 people who have registered their YouTube content creation businesses with the NTS, 330 of whom reported their income.

Total revenue from July to December amounted to 18.49 billion won, which translates to 9.33 million won in monthly salary per YouTuber. This is around three times the average monthly salary of regular office workers last year, which was 3.04 million won.


Sponsorship took up more than half of the YouTubers’ income. Based on analysis from Bak’s office, Google’s AdSense made up 40 percent of total revenue. The remaining 60 percent was from other sources, such as sponsorship deals.


Revenue from sponsorship is also directly related to the issue of “backdoor online advertising,” which recently became an issue after several YouTubers and social media influencers were found to be promoting products in their videos without notifying the viewers of their business ties with corporate sponsors. The Fair Trade Commission last month implemented an amendment to outlaw the practice.

While the NTS accepts business registrations and income reports from YouTubers, only a minority of influencers actually report to the NTS. According to Bak’s office, there are 4,379 YouTubers in Korea with over 100,000 subscribers to their channels. Among them, 55 percent, or 2,387, were registered as independent businesses as of August.

“The YouTube market is rapidly growing, but a majority of participants are a blind spot for tax evasion,” said Bak.

“Taxation officials should actively encourage YouTubers to report their incomes, so that internationally transferred advertisement revenues and sponsorships, which were brought to light during the recent controversy, all get counted for calculating tax."