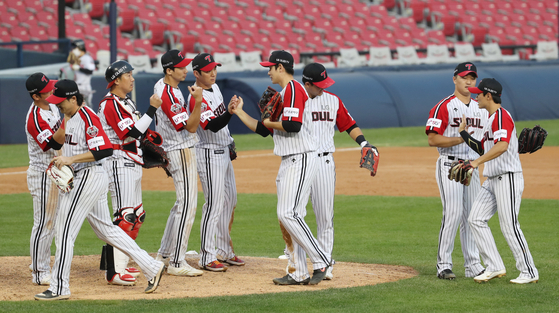 The LG Twins celebrate after picking up a win against the NC Dinos at Jamsil Baseball Stadium in southern Seoul on Sunday. [NEWS1]


With three weeks remaining in the 2020 KBO regular season, the push for the postseason is more competitive than ever.

Adding to the excitement, fans won’t have to go through the nail-biting last few games of the season in front of their TV. As the government lowered the social distancing level on Monday, baseball stadiums are set to reopen their gates starting Tuesday.

The NC Dinos continue to hold a big five-game lead, but the remaining postseason spots — from second to fifth — are all to play for. The LG Twins, KT Wiz, Kiwoom Heroes and Doosan Bears are all still within a few points of each other, with the Twins standing out on a six-game winning streak that moved them into second.


This is quite a comeback for the Twins as their ranking was down to fifth on Oct. 6, which also goes to show just how tightly packed together the four teams are. Back at the start of October, the Twins may even have been worrying about the sixth-ranked Kia Tigers and seventh-ranked Lotte Giants catching up.

This last-minute surge will come as a relief to both the player and fans. The Twins have earned a reputation for slipping out of contention in the second half of the season, something which clearly hasn't been an issue this year.

The Twins haven't stopped since their win against the Samsung Lions at Jamsil Baseball Stadium in southern Seoul on Oct. 7, even winning a double-header against the Dinos on Saturday.

Following that winning streak, they are now ranked second, but only 0.5 games ahead of the third-ranked Wiz. Still, the Twins are the only team in the KBO to have swept their weekend series, an especially notable achievement as it was against the Dinos.

The Heroes are another strong contender for the runner-up spot in the standing. Having gone through a tough week with manager Son Hyuk stepping down, the Heroes fell to fourth in the rankings, but that doesn’t mean that they don’t have a shot. As the Heroes are currently only one game behind the Wiz and 1.5 games behind the Twins, they will have a chance. However, it won’t be too easy as the Heroes have just eight games remaining in the regular season.

The Bears also have plenty of games left to play and, along with the Twins, have shown the best performance over the last 10 games.

While the top five teams in the standing jostle for position, the bottom half of the table has started to slip away. Just a week ago, on Oct. 5, the Tigers were only two games behind the fifth-ranked Bears while the Giants were three games behind.

However, just a week later, the Tigers are now 4.5 games behind the Bears while the Giants are a full five games behind them. Although the two teams have the most games remaining in the regular season, the chances of them advancing to the postseason are very slim.

The regular season will continue on Tuesday, with all games starting at 6:30 p.m.