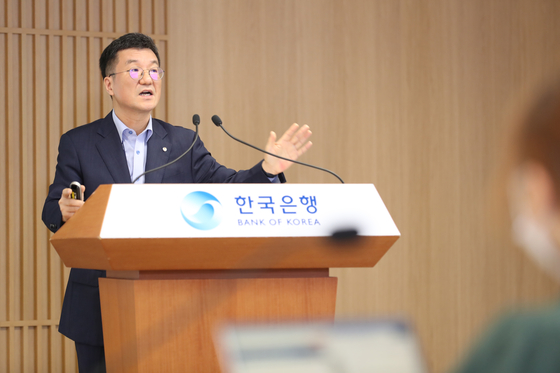 A central bank official speaks to the press. [BANK OF KOREA]


Loans to households continued to hit record levels in September led by borrowings for initial public offerings (IPOs) of stocks and property purchases.

According to Bank of Korea data released Tuesday, 9.6 trillion won ($8.4 billion) of fresh loans were borrowed by households in September, 100 percent more than a year earlier, bringing the total outstanding amount to 957.9 trillion won.

It was the second largest monthly increase since the bank started compiling relevant statistics in 2004. A month before, new household debt increased by 11.7 trillion won, 85.7 percent higher than a year earlier.

“Home-backed loans increased as people borrowed money to finance properties bought in June and July,” explained the central bank. "The total amount of loans borrowed for jeonse has been steadily increasing since August following a rise in jeonse prices."

“September figures indicate that smaller companies seem to be feeling the pain from the coronavirus pandemic more than large companies,” explained an official from Bank of Korea. "Most of the financial support given out from the government is concentrated on small- and medium-sized businesses which contributed to an overall increase in corporate loans."

The total value of new stock issued was 900 billion won, an 800 percent increase from September 2019, due to IPOs by companies like Kakao Games.