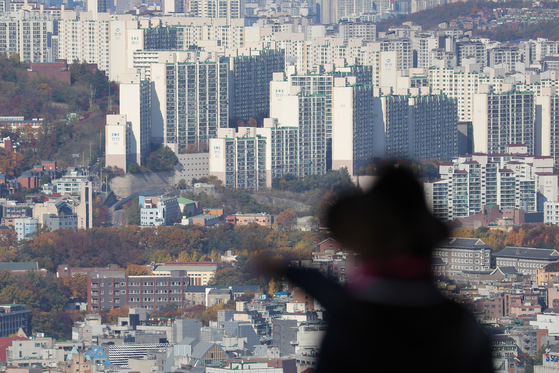 A view of apartments in central Seoul on Nov. 3. [YONHAP]

As the government works to keep property price down, the prices keep rising, especially at the top end of the market.

According to data from real estate information app Zigbang, which analyzed the apartment transaction prices published by the Ministry of Land, Infrastructure and Transport, the average monthly rent price for the top 10 percent of apartments by price in Seoul has been 2.38 million won ($2,150) so far this year. It is nearly fourfold the average price of the remaining 90 percent of apartments, which was only at 612,000 won.

The prices of monthly rents have been dramatically increasing since late July, when the National Assembly passed the tenant protection laws.

During the January-to-July period, the average monthly rent for the top 10 percent costly apartments was some 2.15 million won. It rose 11.6 percent comparatively in the August-to-November period. Using the same periods, the average monthly rent for the remaining 90 percent of apartments declined from 622,000 won to 583,000 won, a 6.2 percent decrease.

The gap between the prices of costly monthly rents and the others has been widening as a result.

In the January-to-July period, the average monthly rent for the top 10 percent apartments was about 3.4 times that of the remaining 90 percent apartments. The number soared to 4.1 during the August-to-November period, reaching an all-time high since 2011 when the Ministry of Land, Infrastructure and Transport started collecting data on transaction prices of apartments. 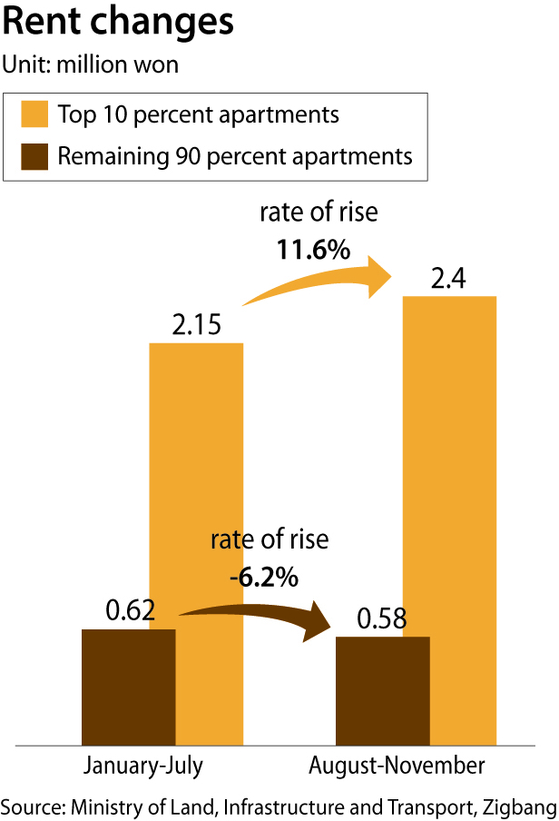 The government’s tenant protection laws reduced the supply of jeonse, or long-term housing deposits, and it is one of the main reasons behind the recent sky-high monthly rent prices. As there are not enough jeonse available while the demand is high, prices of jeonse apartments inevitably increased, causing the prices of monthly rents to soar.

According to Korea Appraisal Board, the jeonse index for July was about 101.2, and it increased 1.2 points to 102.4 in October. During the same period, the monthly rent index increased 0.3 points to 100.1. The index tends to reflect the sentiment in the market overall.

The situation is most evident in affluent Gangnam areas in southern Seoul.

So far this year, roughly 63.2 percent of the most expensive monthly rent apartments are located in the three prime districts south of the Han River — Gangnam District, Seocho District and Songpa District.

Experts say the monthly rents are likely to increase further in the affluent areas, as people there are willing to pay more for a better residential environment in terms of transportation or their children's education.

“As people living in the [wealthy] areas have enough money to pay relatively high prices of monthly rents, they are less sensitive to the growing monthly rent prices,” said Choi Seong-hyun, a manager at Zigbang.

Landlords who are burdened by the high comprehensive real estate tax and property tax stand to earn more by shifting to monthly rent. This also applies to home seekers. Home seekers who lack enough money to purchase the right apartments or can't find any that suit their tastes go for monthly rent apartments to avoid paying taxes.

“We decided to go with monthly rent apartment because we couldn’t find any jeonse apartments that we want,” said a man who is currently paying 2.6 million won in monthly rent.

According to him, he could’ve just bought an apartment, but didn’t purchase one — worrying about paying lots of taxes that he has to pay when he owns a property in Korea.

“I feel like I would be ‘blacklisted’ by the National Tax Service if I own an expensive apartment. So I just used the money in other investment means instead.”