Stand for something, Korea Inc.

Stand for something, Korea Inc. 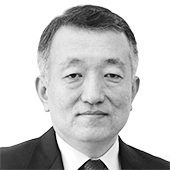 An engineer running a small enterprise in Ansan, Gyeonggi, developed technology for fueling machinery four years ago. It took more than 10 years of hard work and a lot of money to develop. A large company was interested, but its trial dragged on for two years.

The company later asked for proprietary rights to the technology in return for doing business with the company. The engineer refused the deal, which was little more than theft. The large company poached three key engineers from the enterprise. I offered to write a piece on the affair, but the engineer said no in fear of the large company. The predatory food chain remains intact in corporate Korea.

The government and ruling party are pressing ahead with three business regulation bills. Large companies protest they could fall prey to foreign speculative capital if a so-called 3-percent rule — a cap on voting rights to 3 percent in appointing an auditory board member — is enforced. The rule is the first of its kind in the world. Park Yong-maan, chairman of the Korea Chamber of Commerce and Industry, sought help from Kim Chong-in, acting chief of the main opposition People Power Party (PPP), to stop the legislature from making it harder for companies grappling with multiple whammies in a pandemic environment. But Kim turned him away, saying legislators were not making laws that would harm the Korean economy.

Although heading the conservative party, Kim does not side with large companies, referring to them as a group “exploiting all its lobbying resources to get what it wants,” according to his memoir “No Power Is Permanent.” He pushed similar bills when he headed the emergency leadership of the liberal Democratic Party (DP) in 2016. He even argued to include an “economic democratization clause” in a constitutional amendment in 1987. Kim told President Chun Doo Hwan that economic forces could one day overrule political power and fulfill ambitions to influence state affairs on their own. He is not just backing the government-led bills for political gain.

Kim also emphasizes the need for labor law reform, which has long been campaigned for by the business sector. It is not clear whose side Kim is on. We have become too used to black-and-white ideological reasoning. Kim agrees to the three dreaded business bills to improve corporate governance and campaigns for a revision in the labor law to enable more flexibility in the labor market. Germany was able to start labor reforms under a liberal government through the 2002 Hartz concept. If labor law and business acts are reformed at the same time, the economy can become stronger in the longer run.

Large companies are in a dilemma, lacking supporters. Instead of running a publicity campaign or pleading for help from the conservative camp, they must seriously reflect. The Big Business-led economic model exposed its limitations in the late 1970s. State-led development did not have a trickle-down effect. Strongman Park Chung Hee neglected the self-employed and denied workers their rights. His plan to introduce a value added tax drew strong backlash from the self-employed.

Governments afterwards did not fix an industrial structure overly dependent on a few large companies. The side effects were serious. Large companies invested heavily in real estate by exploiting the “three lows” — a low U.S. dollar, low oil prices and a low interest rate — in the 1990s. Real estate prices have jumped even more these days. Debt-financed business expansion brought about a liquidity crisis in 1997. Real estate speculation and short-term debt caused the financial crisis and forced the country into an international bailout. Public complaints built up. Taxpayers could not understand why they ended up paying for bailouts of big companies. The trickle-down capital to smaller businesses did not pan out as expected. Economic polarization deepened, along with public cynicism toward big companies.

Big companies have changed little despite an obviously negative public sentiment. They are going against the market trend by opposing bills unfriendly to them. They still dominate their suppliers and continue to steal talent and technologies from smaller players. Dominant platforms like Naver, Kakao and Baemin have joined the big league. They keep up a cartel by indulging the unions. Under such a mindset, tech companies cannot serve as a bridge for industrial development and jobs.

Big companies must reflect on why they have become so despised by the rest of society. It is not an issue of ideology or antibusiness fervor. Fairness is the issue. Equality, fairness and justice are not slogans, but common values. The Moon Jae-in government used them as slogans to win power, but sloughed them off later. The Moon administration might be remembered for deeply disappointing the people. Large companies are heading down the same path if they fail to uphold the virtues of equality, fairness and justice.