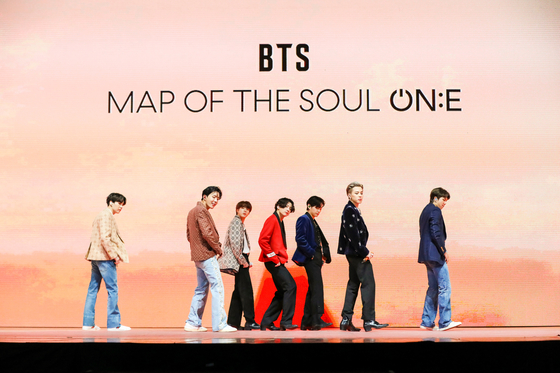 
BTS topped the Billboard Social 50 chart for the 200th consecutive week after the chart's latest update on Tuesday, becoming not only the first K-pop act to do so, but also the first for any musician ever.

BTS sat at No. 1 of the Social 50 chart, which takes its data from analysis company Next Big Sound based on musicians' online popularity such as the number of followers the artist has on social media, how much they are mentioned online and the number of views they get on related content.

The chart was established in December 2010, and this is the first time for any band to top the chart for 200 weeks running, according to Billboard.

The band defeated pop singer Justin Bieber to become the longest-topping musician in February this year.

"BTS got a boost on social networks thanks to publicity generated by the release of a new remix for Jawsh 685 and Jason Derulo's 'Savage Love,' on which BTS is featured, that was released at the beginning of the tracking week," said Billboard.

"Savage Love" currently sits on No. 1 of the Billboard Hot 100 singles chart, followed by the band's own single "Dynamite" on No. 2.