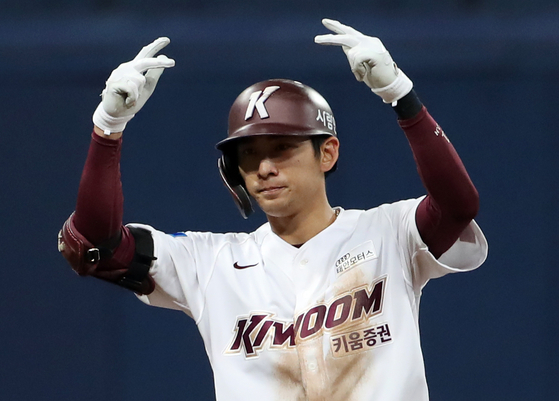 
Lee Jung-hoo of the Kiwoom Heroes set a new single-season record for doubles on Friday.

In the Heroes game against the Doosan Bears at Gocheok Sky Dome in western Seoul on Friday, Lee was in the starting lineup as a right fielder and the fifth batter. At the bottom of the sixth inning, while the Heroes were losing 0-1, Lee hit a double to tie the game.

It was Lee’s 48th double of the season, which exceeds the previous record set by Jared Hoying, formerly of the Hanwha Eagles. Hoying held the record at 47, set in 2018.

Following Lee’s game-tying double at the bottom of sixth, the Bears added three more runs to regain the lead, but the Heroes quickly responded with a big inning at the bottom of the seventh, where they scored seven runs.

The big inning allowed the Heroes to pick up a 7-4 win in the first of their three-game weekend series against the Bears. It was a big win for the Heroes as it allowed them to move up two spots, from fifth to third, in the regular season standings.

“Never mind doubles,” Lee was quoted as saying on Yonhap after Friday’s game. “I wasn’t even getting a lot of singles recently. I made a bit of an adjustment to my batting stance, so that I would go back to the same form from earlier in the season. I’d been working at it during practices and it was nice to see that bear fruit in the game."

Lee added another double during Saturday’s game against the Bears to extend the record to 49.

Playing his fourth season in the KBO, Lee is having yet another consistent season. As of Sunday, Lee has a 180 hits with 15 home runs and 0.335 batting average.

Along with Lee, Heroes shortstop Kim Ha-seong is also having a strong season as he joined the 20-20 club for the first time in his career this season. As of Sunday’s game, Kim hit 30 home runs and has stolen 23 bases.