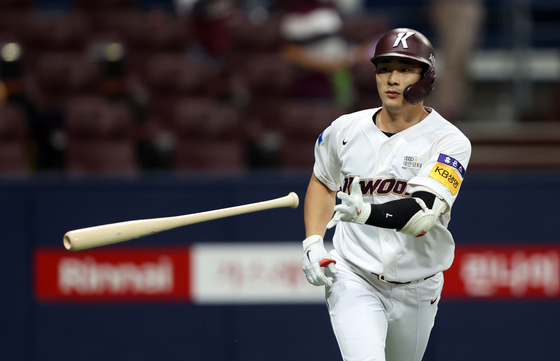 Kiwoom Heroes' Kim Ha-seong rounds the bases after hitting a three-run home run during a game against the KT Wiz at Gocheok Sky Dome in western Seoul on Aug. 5. [YONHAP]

Ahead of the 2020 season, the Heroes’ batting lineup was considered to be one of the strongest in the KBO. But once things got underway, it was clear that something wasn't working.


Clean-up hitter Park Byung-ho struggled in the early days, as did utility player Taylor Motter. Motter was eventually released at the end of May, but the Heroes still weren't living up to the hype at bat. Despite those early teething troubles, Kim and his young teammate Lee Jung-hoo stepped up to the plate to give the Heroes batting lineup a much-needed edge.

August may have been incredibly hot, but Kim has cooled off a little. That doesn't mean he's not still performing — Kim picked up five RBIs in one game against the KT Wiz on Aug. 5.


As of Tuesday’s game, Kim has a 0.281 batting average with 19 home runs and 68 RBIs. Those may not seem like the best statistics, but Kim also has a 0.498 slugging percentage. The number of walks and strikeouts is also impressive as this season, he's given more walks, at 50, than strikeouts, at 38, as of Tuesday's game.

Also the number of home runs stands out as well as his career high was at 23 back in the 2017 season. Since the Heroes have more than 50 games remaining in the season, it is likely that Kim will set a new career high.

Thanks to his performance and the addition of new foreign player Addison Russell, the Heroes are slowly catching up with the NC Dinos, the current leader in the regular season standing.

Below are edited excerpts of an interview with Kim.


Q. During a game against the KT Wiz on Aug. 5 you managed to add five RBIs. How did you feel about that after the game?

A. I’m satisfied that I batted well while [our players were in] scoring position. When we have a runner in scoring position, we could get some pressure of having to add an RBI. The more pressure I get, I just tried to focus on the situation. Rather than my personal statistics, it’s more important to do what the fans expect.


Q. Your batting average up until the end of May was pretty low, at 0.236. Would you say you were affected by the delay to the start of the season?

A. To be honest, I didn’t feel like I was batting poorly. It’s just that my good hits were going straight to the fielders. But I don’t really care about that kind of result. If I don’t lose concentration [in the rest of the season,] then I believe my stats will make their way back to where they should be.


Q. So far this season, you’ve stolen 13 bases, good enough to be ranked tied for sixth in this category. Are you aiming for the stolen base title?

A. I'm not really fussed about the title. I just tell myself to try to steal bases when I’m certain that I can be safe. Rather than the number of attempted stolen bases, the success rate is more important. To do so, I analyze our opposing pitchers a lot by talking to our base stealing coach. That’s how I prepare it.

A. I am hitting more home runs, but I’m not hitting as many doubles. I think I’m a batter who hits a lot of doubles. So I need to work harder. Focusing on weight training during the offseason is helping. During the season, I’m focusing on maintaining my physical condition.


Q. For the first time since your debut, you have more walks than strikeouts. What changes have you made?

A. I’m trying to be more relaxed in the batter’s box and focus more on watching the pitchers’ balls. I think concentration is the key.


Q. What are some areas that you think you need to improve on?


Q. In preparation for this season, what were some areas that you specifically focused on?

A. I focused on helping the team win. To do so, all our players, including myself, have to avoid injuries and play well. If we play for the team’s victory, then our personal statistics will come along.


Q. How much has the addition of Addison Russell helped?

A. We’ve had quite a long time without a foreign player. With the addition of Russell, our batting lineup has gotten stronger and has gotten more organized. Thanks to his addition, our team has won more games. I believe that we’ll have a lot more coming up. Russell is a great teammate.