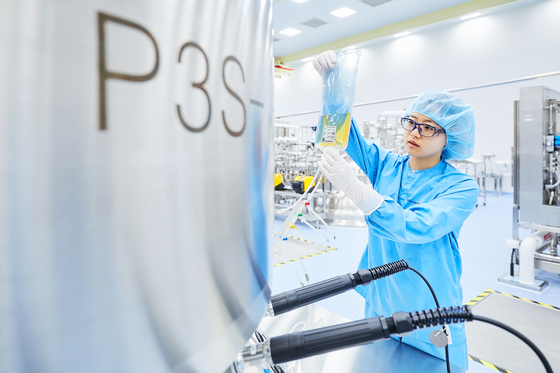 An employee works at a Samsung Biologics factory. [SAMSUNG BIOLOGICS]

“Our sales and operating profit increased during the third quarter as our three factories experienced even growth for the July-September period,” Samsung Biologics said in a statement Wednesday.

Sales in the third quarter dropped by 33.1 billion won compared to the second quarter, as the utilization rate of factories fell. Operating profit dropped due to an increase in selling and general administrative costs.

Total assets reached 6.14 trillion won in the third quarter. The debt-to-equity ratio, which is calculated by dividing a company's total liabilities by its shareholder equity, was at 13.2 percent.

Samsung Biologics announced in August the building of an additional factory. Construction of its fourth plant will begin at the end of the month, and it will be partially up and running by the end of 2022.

The company will also open a research and development center by the end of October in San Francisco.