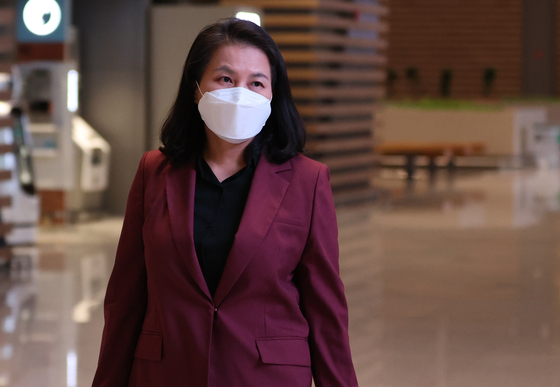 Korean Trade Minister Yoo Myung-hee at Incheon International Airport on Sept. 27 as she leaves for Europe in campaigning for the World Trade Organization's director-general position. Yoo is now one of the two contenders that has made it to the second round. [YONHAP]


Korean Trade Minister Yoo Myung-hee is now one of the two final contenders for the top position at the World Trade Organization (WTO).

According to the Ministry of Trade, Industry and Energy on Thursday, Yoo and Nigeria’s Ngozi Okonjo-Iweala made it to the final round after deliberations in Geneva on Thursday.

The race for the WTO director-general position started with eight candidates. The first round in September eliminated three candidates — Jesús Seade Kuri of Meixco, Abdel-Hamid Mamdouh of Eygpt and Tudor Ulianovschi of Moldova. The second round eliminated three including Amina Mohamed of Kenya, Mohammad Al-Tuwaijri of Saudi Arabia and Liam Fox of Britain.

A final decision by the 164 member countries is expected on Nov. 7.

No matter who is picked, the World Trade Organization will have its first woman director since its founding in 1995.

If Yoo is picked, she will be the first Korean to head the international trade institution.

According to the Korean government, Yoo received support from members across the board from Europe, South America, Asia-Pacific and Central Asia, many of them praising Korea’s handling of the Covid-19 pandemic.

Yoo, a civil servant since 1991, specializes in trade. She was involved in the bilateral FTA between Korea and the United States.

Yoo has been strongly supported by President Moon Jae-in.

According to the Blue House, Moon told the government to put all possible efforts into Yoo succeeding.

“The biggest hurdle is left,” Moon said on Thursday, according to Blue House spokesman Kang Min-seok.

“The government has to give all that it has [to help Yoo win] for the development of multilateral trade and the expansion of the free trade order,” Moon said.

It has been reported that Moon has personally made calls to top leaders of other countries on behalf of Yoo's candidacy, including a request for support from Russian President Vladimir Putin last month during a phone call celebrating the 30th anniversary of trade relationship between the two countries.

Moon also asked for Germany’s support during a phone call to Chancellor Angela Merkel on Oct. 1.

Okonjo-Iweala is a strong contender, having served as Nigeria’s finance minister twice and its foreign affairs minister. She has strong international connections after working at the World Bank for 25 years and rising to its No. 2 position.

WTO chief Roberto Azevedo unexpectedly resigned in May with a year remaining in his term.

The WTO director-general serves a four-year term that can be extended once.