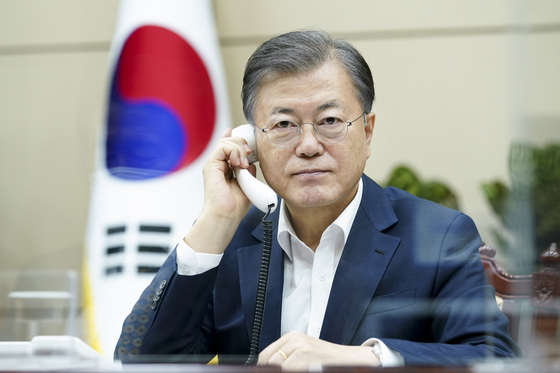 President Moon Jae-in has a phone talk with Malaysian Prime Minister Muhyiddin Yassin on Monday at the Blue House. [YONHAP]

“Amid the global economic crisis, it is important to elect a director-general of the WTO who has capabilities and the vision to reform the WTO to protect free trade and restore confidence in multilateralism,” Moon was quoted as telling Muhyiddin by Blue House spokesman Kang Min-seok. “Yoo is not only an expert in trade but also a candidate with great capabilities such as the network she has built as trade minister. She is the best candidate to coordinate thorny issues between advanced and developing economies and successfully reform the WTO.”

During their 20-minute conversation, Muhyiddin congratulated Moon for Yoo advancing to the final round. “The next leader of the WTO needs vision and leadership ability, and Yoo has played a crucial role with her impressive experience and career history,” Muhyiddin was quoted as telling Moon by Kang.

Moon has been actively supporting Yoo’s campaign by contacting world leaders. He has sent letters or telephoned dozens of leaders to seek their backing for Yoo.

Earlier this month, Yoo and Nigeria’s Ngozi Okonjo-Iweala advanced to the final round of the election for director-general of the WTO. A final decision, requiring a consensus of 164 member countries, is expected on Nov. 7.

The race started with eight candidates. The first round in September eliminated three, and the second round eliminated another three.

After passing the civil servants’ exam in 1991, Yoo has had a successful career as a public servant in the Trade Ministry. During the Park Geun-hye presidency, she served as the Blue House spokeswoman for foreign media for one year in 2014.

Moon promoted Yoo to trade minister in February 2019. After becoming the first woman to serve as Korea's trade minister, Yoo led the country’s victorious 2019 WTO appeal in a dispute over import bans and testing requirements it imposed on Japanese seafood in the wake of the 2011 Fukushima nuclear disaster.

In 2018, a WTO panel supported Japan, ruling that Korea was wrong to keep its trade restrictions. That verdict was overturned.