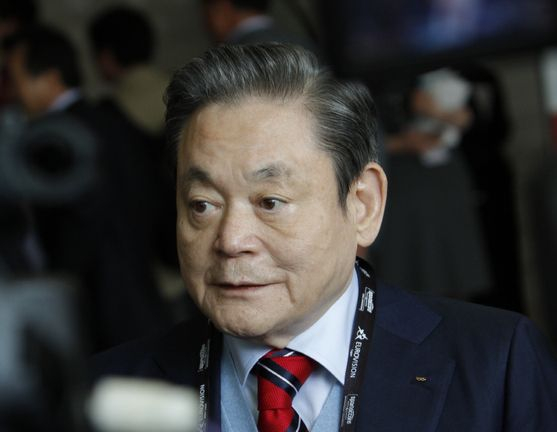 
Lee Kun-hee, whose building of Samsung into a titan in semiconductors and consumer electronic products made him one of the most important figures in postwar Korean history, died Sunday. He was 78 years old.


Lee, chairman of Samsung Electronics for 33 years, died at the Samsung Medical Center in Gangnam, southern Seoul, where he had been hospitalized since May 2014 after suffering a heart attack in his home in Itaewon, central Seoul.

“Samsung Electronics Chairman Lee Kun-hee passed away on Oct. 25 2020,” said Samsung in a statement early Sunday. “With the wishes of the deceased and the bereaved, a small, private funeral will take place.”

“Lee’s condition rapidly deteriorated starting Thursday, and his kidney functions quickly dropped,” said a person affiliated with the Samsung Medical Center, according to a report by the JoongAng Ilbo. “The medical staff did its best, but he couldn’t recover and passed away.”

Born in Daegu in 1942, Lee was the third son of Samsung founder Lee Byung-chull. As a very small boy, he was raised by his grandmother in Uiryeong, South Gyeongsang. He only met his father, who was busy managing Samsung, once or twice a year, according to local media reports.

At the age of six, he was reunited with his family in central Seoul. But his family was soon separated again following the outbreak of the Korean War (1950-53).

He attended middle school in Japan and high school in Seoul. Lee graduated from Waseda University in Tokyo and studied in a master’s program at George Washington University in Washington, D.C., but did not complete it.

Perhaps due to his constant moving around, Lee was known as an introverted student. But he surprised others with his knowledge and logic once he started speaking, according to acquaintances.

He earned the nickname “Hermit King.”

Lee became the second chairman of Samsung at the age of 46 following his father’s death in 1987. He is credited with fundamentally reforming Samsung and having a vision of it becoming a world-class company, not a cheap Asian manufacturer of goods for other brands.

A landmark moment in that evolution came in 1993, in what became known as the Frankfurt Declaration, when he told Samsung executives gathered in Frankfurt for an emergency meeting to “change everything, except your wife and children.”

That was the start of Lee's so-called New Management.

"We won't survive without painful changes," Lee told his executives.

"Since the declaration, Lee pushed for reforms in all areas of management," said Samsung in a statement. "Lee saw people as the beginning of the reform, and pushed a slogan to 'change starting from myself.' The management style changed from valuing quantity to quality. From such an effort, Samsung managed to grow even in the Asian financial crisis of 1997 and the global financial crisis in 2009."

Under Lee's leadership, Samsung grew to become one of the biggest brands in the world in both semiconductors, which the company started making in 1974, and consumer electronics. After establishing a reputation for quality flip phones, Samsung became the world leader in smartphones, starting with the underwhelming Omnia in 2008, but particularly with the Galaxy series that began in 2010.

Lee was a member of the International Olympic Committee (IOC) from 1996 to 2017 and played an instrumental role in Korea's getting the right to host the 2018 PyeongChang Winter Olympics.

He is survived by his wife Hong Ra-hee, former director of the Leeum, Samsung Museum of Art, his son Lee Jae-yong, vice chairman of Samsung Electronics and its de facto leader, and daughters Lee Boo-jin, CEO of the Hotel Shilla, and Lee Seo-hyun, who runs the Samsung Foundation.

Lee's mourning altar is being held at the Samsung Medical Center in Gangnam.

His family, including Lee Jae-yong, and Samsung Electronics employees arrived at the center on Sunday.

Family and relatives offered condolences at the hospital starting on Sunday afternoon. Samsung employees are invited to the mourning altar starting Monday.

Samsung Medical Center is allowing only 50 people inside at one time due to social distancing restrictions.

The mourning altar will continue for four days until Lee's coffin is carried out on Wednesday.

“Apart from the external growth, [Lee] adopted a developed management system and strengthened management through the creation of a company culture that values challenges,” said Samsung in a statement Sunday.

Following Lee’s death, many praised his contribution to Korea’s economy.

“Chairman Lee Kun-hee not only grew Samsung into a top-notch company, but was the best leader in business circles and helped boost Korea’s economy to the level of developed nations,” said the Federation of Korean Industries (FKI) in a statement.

“The chairman’s attention didn’t just stay on the economy. He raised the country’s reputation by [helping] bring the 2018 PyeongChang Olympic Winter Games and practiced the spirit of coexistence by taking care of neighbors in need,” the FKI added.

The Korea International Trade Association, which has more than 70,000 members, expressed "deep condolences for the death of Samsung Group Chairman Lee Kun-hee, who made history in the Korean economy.” It added that Lee “helped Korea become a strong exporter and an economically developed nation.”