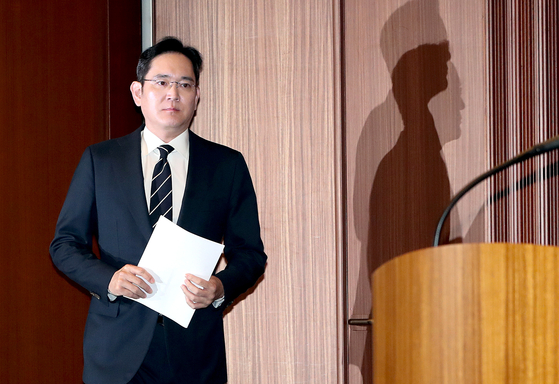 
One trillion won ($898 million) from Lee Kun-hee’s 26-trillion-won estate will be donated to support a children’s hospital and the founding of a hospital for infectious diseases, the first such institution in Korea.

The details of the disposition of the assets were reported by Samsung Electronics, which is speaking on behalf of the family about the inheritance process.

His collection includes works by Picasso, Monet and Dali.

The company also clarified the inheritance tax the beneficiaries will pay, confirming that the total will be more than 12 trillion won. The total is based on a 60 percent tax rate, according to a Samsung Electronics spokesperson.

Family members will "pay over 12 trillion won of inheritance tax, which is more than half of the inherited assets, including the securities of Samsung Life Insurance, Samsung Electronics and Samsung C&T and real estate," according to the statement, which added that the obligation will be divided into six payments over five years. 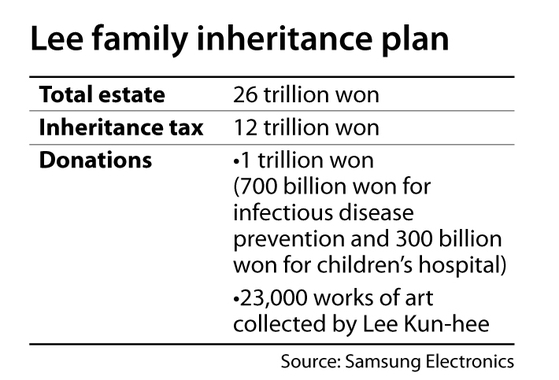 The plan will require the family to pay 2 trillion won by the end of this month and the remaining 10 trillion won over five years in annual installments.The interest rate will be 1.2 percent.

Questions remain as to how the inherited shares will be divided up among the beneficiaries, eldest son Lee Jae-yong, daughters Lee Boo-jin and Lee Seo-hyun and Hong Ra-hee, Lee Kun-hee’s wife.

If Lee Kun-hee died without a will, the beneficiaries could either determine the ratio on their own or accept the ratio set by Korea’s Civil Act.

“Without a valid will, the joint heirs can discuss and set how much each member will take if they do not follow the predetermined ratio set by law,” said Jon Woo-jung, a partner at Gangnam LLC, a law firm based in Seoul.

“For the agreement to be legally binding, every inheritor should agree,” the attorney said.

A source at Samsung Electronics confirmed that the family is “in the process of discussing the split,” playing down the possibility of the predetermined ratio being used.

If an agreement is not reached, they must accept the statutory ratios. The wife would get a third of the assets and the three children 22.2 percent each.

That is seen as unlikely.

“In accordance with the stipulated division ratio, Lee’s wife, Hong Ra-hee, will obtain more shares than Lee Jae-yong and become the top individual shareholder at Samsung Electronics, a result that the family would want to avoid,” said an attorney at a Seoul law firm.

Hong currently has a 0.91 percent stake in Samsung Electronics while the son, who holds the title of vice chairman, owns 0.7 percent.

Lee Kun-hee’s family filed an application earlier this week to assume ownership of the 20.76 percent of Samsung Life Insurance that was owned by the late chairman, although they didn’t reveal the specific breakdown.

Determining the ratios could take time, given that Lee Jae-yong is now imprisoned after being convicted of bribing the former President Park Geun-hye.

In terms of the donations, the company said that 700 billion won will go to the National Medical Center for the establishment a hospital and research facilities dedicated to preventing infectious diseases.

Another 300 billion won will be donated to Seoul National University Children's Hospital for the treatment of young patients diagnosed with cancer and rare diseases.

The company explained that the decision follows Lee Kun-hee’s wishes.

“A corporation should be committed to advancing the health and wellness of mankind,” he was quoted in the statement as having said.