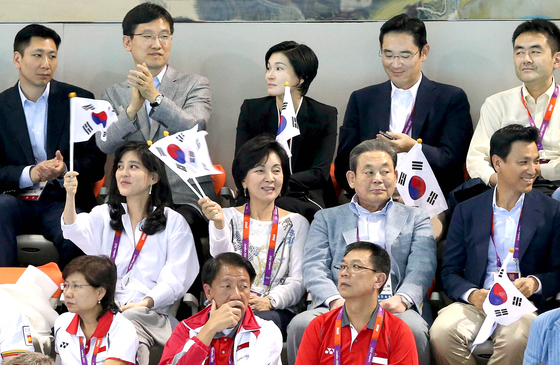 
The distribution of the 26 trillion-won ($23 billion) estate of Samsung Electronics Chairman Lee Kun-hee has unexpectedly made Hong Ra-hee, Lee’s wife, the largest individual shareholder in the electronics giant.

With no will made public or confirmed, many expected the Lee family to reach some kind of agreement to favor Lee Jae-yong, the patriarch’s only son and Vice Chairman at Samsung Electronics, in particular when it came to the 4.18 percent stake in the tech company held by his father.

The Lees, however, complied with a predetermined ratio set by law to give one third of the shares to Hong and equally divide the rest among the three children, according to electronic disclosures released on Friday.

Analysts and professors specializing in corporate governance concluded that the decision was meant to spread around the enormous inheritance tax bill of about 9 trillion won attached to the Samsung Electronics shares, which are valued at 18.4 trillion won.

“If Lee Jae-yong inherited a disproportionately large amount or all of the Samsung Electronics stock, it would be extremely hard to cover the tax on his own,” said Mike Cho, a business professor at Korea University. 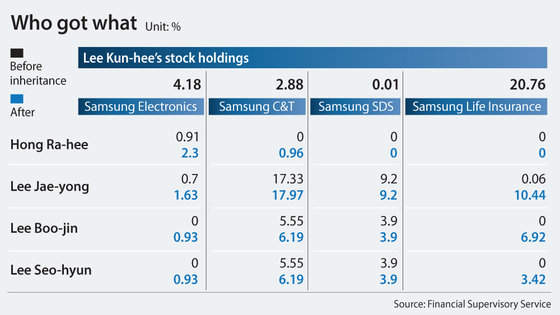 Lee's widow acquired a 1.39 percent stake of the electronics maker in the distribution, bringing her holdings to 2.3 percent. Lee Jae-yong inherited 0.93 percent shares to bring his holdings to 1.63 percent in total.

“With the acquisition of Samsung Electronics shares, the two daughters, who formerly didn’t own any shares, will be able to tap dividends from the stock to pay their inheritance tax,” said the Cho, who previously served as the head of the Korea Corporate Governance Service, a local proxy advisory firm.

Before the inheritance, the son owned 0.06 percent shares in the life insurer.

“This is seen as a mechanism to ensure a strong grip by Lee Jae-yong over the conglomerate,” said Ahn Sang-hee, general director of the corporate governance research division of the Daishin Economic Research Institute.
“Lee will be able to maintain his influence on Samsung Electronics and other affiliates through his sizable holding in Samsung Life Insurance and Samsung C&T. There is no significant change in Samsung’s governance system centered around Lee Jae-yong.”

Some analysts expect the role of the insurance company to further grow, since it could turn into a holdings unit for Samsung's financial affiliates including Samsung Securities and Samsung Card.

"In the long run, it is inevitable to turn Samsung Life Insurance into a holdings unit," said Lee Hyun-oh, a senior analyst at Sustinvest, a Seoul-based proxy advisory and research firm.

"Taking this into account, [the family members] could agree to distribute more shares for Lee Jae-yong on the grounds that Samsung Life Insurance owns significant shares in major financial affiliates and it is important to strengthen ownership in the stock," Lee said.

Shares of Samsung Life Insurance hit a 52 week high of 88,900 won May 3, following the breakdown announcement on April 30, as the unit will likely keep its key role in the corporate structure.

“The latest division of shares among family members shows that Vice Chairman Lee will continue the governance structure in which Lee Kun-hee solidified his control of Samsung Electronics through Samsung Life Insurance,” said Lim Hee-yeon, an analyst at Shinhan Financial Investment.

“Therefore, Samsung Life Insurance will maintain its central role through which family members can exert their influence,” Lim said.

In the meantime, the widow and children paid 2 trillion won in inheritance tax April 30, which will reach over 12 trillion won. They will pay the balance over the five years.

To make her payment last month, Hong borrowed 1 trillion won from different lenders including Woori Bank and Meritz Securities, according to filings on an electronic disclosure site, while the two daughters borrowed around 340 billion won each.

Records about Jae-yong's borrowings have not been disclosed.