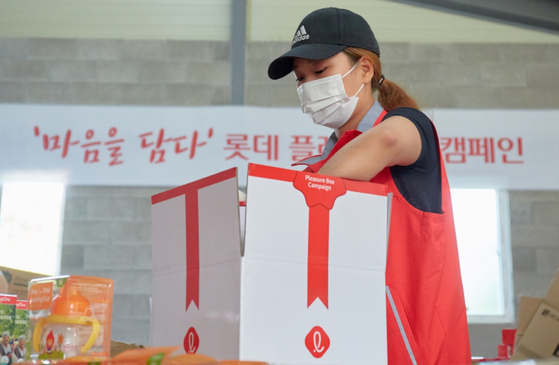 Last month, Lotte Group teamed up with the Lotte Welfare Foundation and Lotte Fine Chemical to distribute thousands of Lotte Pleasure Boxes filled with food and baby products to 1,300 single mothers in Korea.

The Pleasure Box Giveaway Campaign, which started in July 2013, has been offering a helping hand to people in need, providing supplies and other goods when they needed it.

This year marked the 38th edition of the campaign, and the number of boxes distributed reached 54,500.

In a change from normal arrangements, boxes were not distributed by Lotte workers and volunteers this year because of concerns about Covid-19.

Other Lotte affiliates have also been working on social responsibility schemes.

Along with Lotte Fine Chemical’s socio-environmental contribution, employees from Lotte Asset Development made 120 dolls to help children alleviate stress. The dolls are scheduled to be handed out in partnership with ChildFund Korea.

The bracelets and stars will be distributed to the children via the Korea Make-A-Wish Foundation.