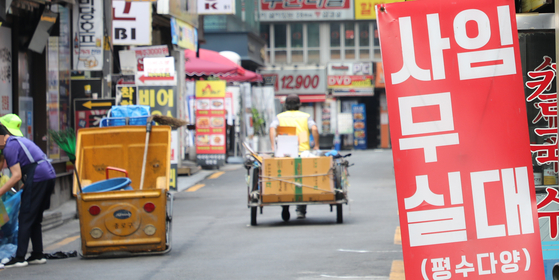 The number of salaried workers decreased for the first time in August since 2003. [YONHAP]


The number of paid workers, on staff and contract workers, shrunk for the first time since relevant data were first collected in 2003, and the wage gap between the groups hit a new high.

Statistics Korea Tuesday released a report on the status of economic activity by labor type in August. Considering that the effect of major coronavirus clusters was not yet felt in August, the stats for September are expected to be even worse.

Contract workers were hurt the most by the pandemic, especially in jobs that have direct contact with customers, such as hospitality and restaurant businesses.

In August, there were 20.45 million salaried workers, a 0.55 percent decline from a year earlier. That represents the first year-on-year decline since data began being compiled in its current form in 2003. The number of salaried workers in Korea has almost always risen in line with population increases.

However, in August, more people were laid off than hired.

“Usually, when the number of salaried workers goes up, there are six new regular workers for four new contract workers," said Chung Dong-wook, head of Statistics Korea’s employment stats section. “However, in August both groups shrunk.”

However, the number of temporary jobs rose by 133,000 or 3.5 percent on year, due to government hiring of senior citizens in such jobs. As Korea grows older as a nation, the government has been trying to actively engage the elderly in the economy. Last year, the government allocated 820 billion won ($722 million) for job creation for senior citizens. Statistics Korea in July reported that the highest number of the elderly aged between 55 and 79 was employed as of May since relevant statistics were first compiled in 2009.

The income gap between salaried and contract workers, which was 1.52 million won as of August, hit its highest point since data started being compiled in its current form. In the June to August period, the monthly average salary of contract workers was 1.71 million won, 18,000 won, or 1 percent lower than last year. Meanwhile, the average monthly salary of salaried workers was 3.23 million won — 2.2 percent, or 69,000 won higher than last year.

The coronavirus pandemic is a direct cause of the worsening employment scene, although there is criticism that government policy contributed to the job market woes.

“The government’s employment policy has brought increased costs for corporations, and since the economy is not in a great state, they have made decisions to automate many tasks in order to avoid hiring new people,” said Sung Tae-yoon, an economics professor at Yonsei University. “It is right to strengthen support for affected individuals who are in danger of losing their jobs, rather than putting the burden on companies.”

“Whether new regular or irregular jobs are created is not important. What’s important is putting an end to the stalled labor market scene and enlarging the employment pie as a whole,” said Kim Sang-bong, an economics professor at Hansung University.