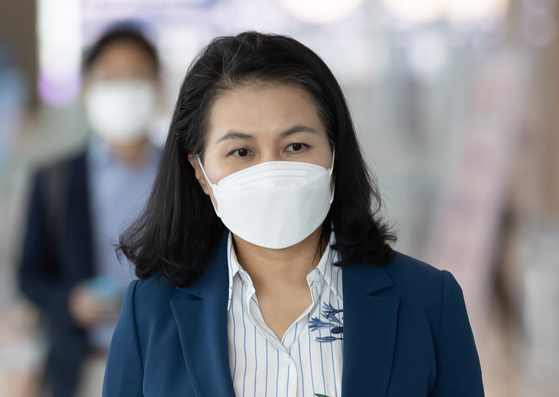 Korean Trade Minister Yoo Myung-hee at the Incheon International Airport heading to Washington in September. Yoo while was endorsed by the U.S. government, is facing an uphill as her competition is reported to have secured a larger support for the vacant WTO director-general seat. [YONHAP]

Korean Trade Minister Yoo Myung-hee was endorsed by the United States to be the next World Trade Organization director-general.

The odds are in favor of Ngozi Okonjo-Iweala, the former Nigerian Finance and Foreign Minister. She has served as the No. 2 at the World Bank and has the full support of European Union member states as well as Japan and China.

“One delegation could not support the candidacy of Dr. Ngozi and said they would continue to support the South Korean minister — that delegation was the U.S.A.,” said Keith Rockwell, WTO spokesman said on Wednesday after an informal meeting.

Among the 27 delegations that took the floor at the WTO’s meeting in Geneva on Wednesday, the United States was the only one that supported Minister Yoo.

The selection process is long and involves a series of meetings between the heads of three WTO committees and the ambassadors of all the member states in order to reach a consensus, which has always been accomplished. A formal vote has never been held.

“The United States supports the selection of Korean Trade Minister Yoo Myung-hee as the next WTO Director-General,” the office of the U.S. Trade Representative office posted on its website Wednesday.

“Minister Yoo is a bona fide trade expert who has distinguished herself during a 25-year career as a successful trade negotiator and trade policymaker. She has all the skills necessary to be an effective leader of the organization.”

The U.S. government took note no “multilateral tariff negotiations in 25 years,” dispute settlement out of control and the lack of basic transparency obligations, and it stressed the need for reform.

“It must be led by someone with real, hands-on experience in the field,” the trade representative wrote.

It is estimated that the Nigerian candidate already has the support of roughly 90 to 100 among the 164 WTO members, including Japan, which is locked in a trade dispute with Korea.

“This was an informational head of delegation meeting,” Rockwell said, stressing that the meeting was “never intended” to achieve a final decision on the WTO’s next director-general.

The next director-general is expected to be announced during the WTO General Council meeting on Nov. 9. This gives Korea roughly two weeks to turn the tide.

President Moon Jae-in fully supports Yoo and has made calls on the matter to a number of heads of state, including those of Russia and Germany. The most recent call was made to Canadian Prime Minister Justin Trudeau earlier this week.