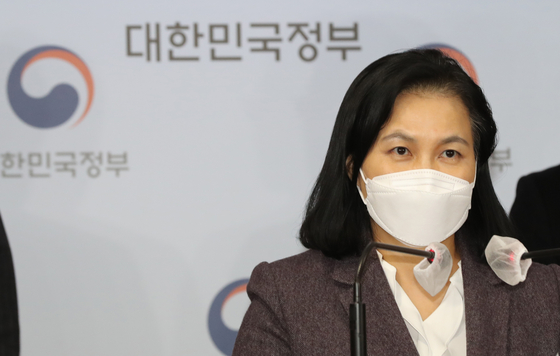 Korean Trade Minister Yoo Myung-hee announces her decision not to pursue the top post at the World Trade Organization at the government complex in Seoul on Friday. She was one of the finalists, the furthest that a Korean contender has made. [YONHAP]

Korean Trade Minister Yoo Myung-hee tossed in the towel in the contest for World Trade Organization (WTO) head, ending a seven-month effort to win the post.

Yoo is the first Korean and first female to reach to the final round.

The Korean trade minister on Friday announced that she is out of the running for the director general position at the international trade organization, paving the way for Ngozi Okonjo-Iweala, former Nigerian Finance Minister and Foreign Affairs Minister and 25-year World Bank veteran.

The Korean minister said she withdrew to allow the organization to move forward and address major issues, such as the decline of multilateralism and pending trade disputes, while addressing future challenges, including trade protectionism, climate change and the changes ushered in by digitalization.

The director general post “needs to be approved by every member,” Yoo said. “We have waited for months, yet the member countries couldn’t reach an agreement, making the future [of the WTO] uncertain with the leadership remaining vacant.”

“To support consensus of the members, and with the agreement of the U.S., I have decided to quit,” Yoo said, adding that the new Joe Biden administration respected her decision.

The Korean minister did not say whether she will support her competition, but said the Korean government will participate actively in restoring and enhancing multilateral trade as a responsible member of the WTO.

She noted that since announcing her run in June last year, she has traveled to 100 countries meeting top trade officials to rally support.

During her trips, she said she has realized the positive recognition of many member countries on the role that Korea plays as a major trading nation, and with this experience, the Korean government will more actively engage in major trade issues.

Yoo, a life-long public servant who led the signing of a free trade agreement with the U.S., was the third Korean to stand for WTO top post.

She made it to the final round in October. Although the odds seemed to be against Yoo, the Korean minister remained in the race with strong support from President Moon Jae-in.