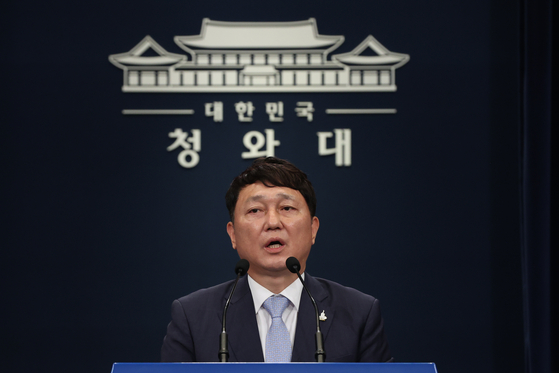 
A top presidential aide claimed Wednesday that granting pardons to President Moon Jae-in’s two predecessors will depend on public opinion.

Choi Jae-sung, Moon’s senior presidential secretary for political affairs, broke the Blue House’s silence on the issue during an interview with Christian Broadcasting System (CBS) radio in the morning. Choi's comments were made on the eve of a Supreme Court ruling Thursday for former President Park Geun-hye, who was convicted of abuse of power and taking bribes from conglomerates.

In the interview, Choi was asked President Moon’s position on issuing pardons to Park and her predecessor Lee Myung-bak. On Jan. 1, ruling Democratic Party (DP) Chairman Lee Nak-yon said he intended to ask Moon to consider pardons as a gesture of national unity.

Moon will have to talk about the sensitive political issue if asked at an upcoming New Year’s press conference, Choi said. The issue was not addressed in a New Year’s address Moon gave on Monday.

“Granting pardons is the president’s exclusive power,” Choi said. “But that power was delegated by the people, and the president cannot think about exercising it without considering the people’s wishes. Therefore, the consideration must be made from the perspective of the people.”

Choi also said it was undesirable for ruling and opposition politicians to bicker over the issue. The DP has said apologies from Lee and Park are a precondition for pardons, while the opposition People Power Party (PPP) expressed disgust at that idea.

“Both former presidents have said they were victims of political trials on unfair charges, but the ruling party is demanding apologies,” Rep. Joo Ho-young, floor leader of the PPP said. “This means the administration has no intention to pardon them.”

While Lee and Park have not made public apologies, the PPP apologized last month for the corruption scandals involving the two leaders. Kim Chong-in, acting leader of the PPP, issued a formal apology in a press conference last Dec. 15.

Lee was president from 2008 to 2013, and Park succeeded him until she was impeached and removed from the post in 2017. 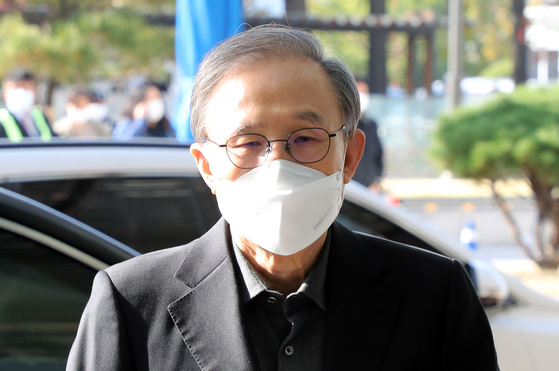 In this file photo, former President Lee Myung-bak enters the Seoul National University Hospital in central Seoul on Oct. 30, 2020 before his imprisonment to serve a 17-year prison term. [YONHAP] 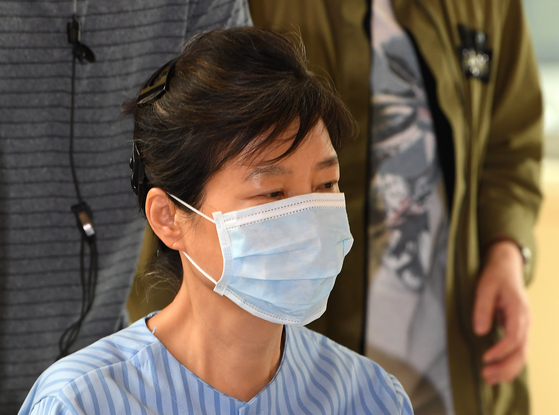 The Supreme Court convicted Lee of embezzlement and taking bribes from a conglomerate and sentenced him to 17 years in prison last October.

Park, who was impeached in 2016 and removed from office in March 2017, was convicted of corruption and abuse of power, and most recently was sentenced to 20 years in prison. That sentence was appealed by the prosecution and the Supreme Court's decision is scheduled for Thursday.

“I don’t think there is a need to have a political debate anymore,” Choi said Wednesday. “It is the president’s exclusive power, and the precondition is a public [consensus].”

In a recent opinion poll, the public seemed skeptical that pardoning Lee and Park would contribute to national unity.

According to a Realmeter poll released Monday, 56.1 percent of those polled said granting pardons to Lee and Park will not help unite the nation, while 38.8 percent said it would. The poll, conducted Friday, had a 95-percent confidence level and a margin of error of plus or minus 4.4 percentage points.

A top DP politician, Gyeonggi Governor Lee Jae-myung, said Tuesday he opposed pardons for Lee and Park. “When they committed crimes, they deserve to take responsibilities,” he said.