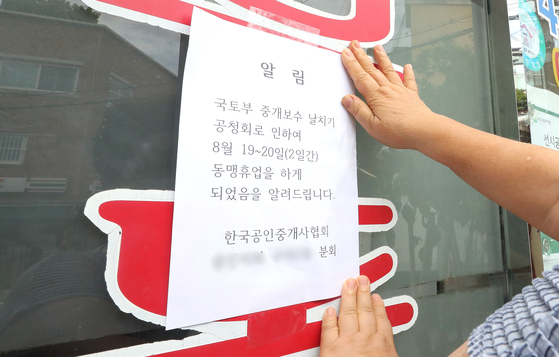 A realtor in downtown Seoul posts a notice about going on strike on Aug. 19 to protest the government's decision to cut commissions on property purchases. [NEWS1]


The government's recent decision to cut real estate brokers' commissions is facing a backlash from the public — with some people saying they should have been cut more.

“Realtors earn too much by doing almost nothing but just introducing properties that are up for sales to buyers,” a reader told the JoongAng Ilbo via e-mail. “Commissions are unearned income just like speculative real estate investment. The rates should be cut sharply in order to reduce the number of realtors in the country.”

On Aug. 20, the Ministry of Land, Infrastructure and Transport announced a cut in the cap on real estate commissions from 0.9 percent of the transaction price to 0.7 percent. Since February, a task force led by the ministry has been discussing the issue with 12 experts from local governments and civic groups, including the Korea Association of Realtors and the Korea National Council of Consumer Organization amid growing public complaints about higher commissions due to the recent surge in real estate prices.

The reduced rates will be applied as early as October, according to the Ministry of Land, Infrastructure and Transport.

However, some members of the public argue that the change will do them no good. Commissions are only being reduced for expensive properties and stay unchanged properties under 600 million won, which means rich buyers will benefit only. 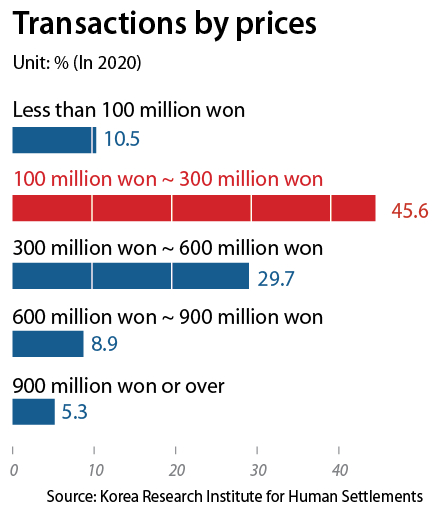 “Apartment prices outside Seoul are rising, but many of them still don't cost over 600 million won,” said a resident of Jeonju, North Jeolla. “The government’s cuts in commissions will be of no practical help.”

Questions are also being raised about the government's allowing parties to negotiate commissions, which could make transactions messy. People called for fixed rate, instead of rates that have ceilings.

Some analysts say the government didn't analyze the real estate market very well. No data about core information like income level of realtors was provided by the ministry, they argue.

“The government should’ve made a thorough review of the situation of real estate agents such as the average number of transactions they handle per year and the expenses they must pay to run agencies,” said Seo Jin-hyung, head of the Korea Real Estate Society.

The Korea Association of Realtors strongly oppose the cuts, unsurprisingly.

“We cannot accept the decision as it was decided arbitrarily by the government without considering our situations,” the association said in a statement on Aug. 20. “We, 115,000 realtors, and our three million family members will go on strike until the government completes reviews the revision and has a truthful negotiation with real estate agents.”

Meanwhile, more Koreans are turning to proptech companies like Dawinproperty and Woodaebbang. Proptech is a portmanteau of the words “property” and “technology,” and describes services offering customers properties for rent or sale as well as market data and analysis online.

Property brokerage commission cap to be cut to 0.7 percent

When will world heed the KTC? (KOR)