After Wildcard triumph, Twins face a challenge from an old rival

After Wildcard triumph, Twins face a challenge from an old rival 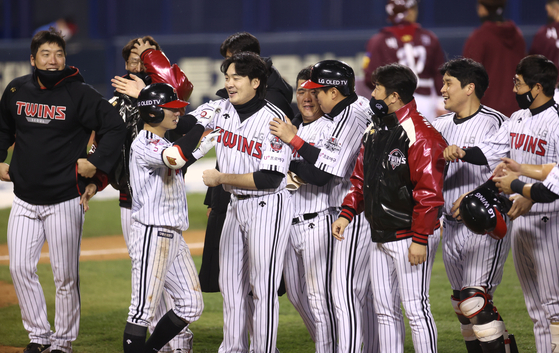 The LG Twins players celebrate after defeating the Kiwoom Heroes 4-3 in Game 1 of the Wildcard Series at Jamsil Baseball Stadium in southern Seoul on Monday. With a win, the Twins advance to the first round of the postseason. [YONHAP]


After almost five hours of baseball, it’s the LG Twins that are heading to the first round of the 2020 KBO postseason.

Playing in Game 1 of the Wildcard Series against the Kiwoom Heroes at Jamsil Baseball Stadium in southern Seoul on Monday in front of 6,958 fans, it was the Twins that got the first run on the scoreboard from outfielder Chae Eun-seong’s solo home run at the bottom of the first.

But the Heroes didn’t make it easy on the Twins, as they quickly squared the game up by adding a run at the top of the fourth inning. Lee Jung-hoo hit an RBI single to bring Seo Geon-chang home. Then, Heroes slugger Park Byung-ho finally broke his silence at bat by hitting a solo home run at the top of the seventh to allow the Heroes to take the lead for the first time.

That didn’t last long, as the Twins quickly responded by adding another at the bottom of the seventh.

With the score tied at 2-2, the two teams headed to extra innings. It wasn't until after 11 p.m. in the 13th inning that the silence was finally broken.

The Heroes added a run at the top of the 13th, going 3-2 up with just three outs separating the team from staying alive for a second game of the series. But it wasn't to be. The Twins immediately bounced back, scoring two at the bottom of the 13th to take the win and the Wildcard Series.

The Twins first brought Lee Hyung-jong home to tie the game again, and with the bases loaded at two outs, Shin Min-jae hit the winner to finish the game 4-3.

As the Twins enter the Wildcard Series with a one-game lead, they immediately advance to the first round of the postseason against the third-ranked Doosan Bears, starting Wednesday at 6:30 p.m. at Jamsil Baseball Stadium.

As well as the first round of the postseason proper, the clash between the Bears and the Twins brings together the two Jamsil clubs in one last derby for the 2020 season, and is bound to pull in the fans.

Due to the postponed 2020 KBO regular season, the first round of the postseason will be played in a best-of-three series, instead of the usual best of five.

The Bears fans have high expectations for the series as the Bears tend to dominate the Twins. For years, the Bears were always ahead when it came to their regular season head-to-head record against the Twins. This season, the Bears were up once again with nine wins, a tie and six losses.

Despite having a better head-to-head record in the regular season, anything can happen in the postseason where starting rotations become less important as everything resets with every new series. While the two Jamsil teams face each other every season, in terms of the playoffs, this is the first time since 2013 that the two teams have played each other in the postseason.

The two teams’ experience will be another factor in the series. For the Bears, this is the sixth straight season that the club has managed to advance to the postseason. Of the six, they’ve managed to win the Korean Series three times — in 2015, 2016 and 2019.

For the Twins, this is only their second straight season making it into the postseason. Last season, the Twins started off from the Wildcard Series and headed to the first round of the postseason but lost the series 3-1 to the Heroes.

With both teams setting their sights on the Korean Series, the Twins will have Lee Min-ho start the first game, while the Bears will have Chris Flexen.

Looking at the regular season statistics, Lee had quite a season as a rookie, finishing with a 3.69 ERA with four wins and four losses throughout 20 games. Lee pitched in 97 and two-thirds innings.

For the Bears, Flexen will also be appearing in the KBO postseason for the first time. Throughout the 2020 regular season, Flexen has been a strong force on the Bears’ mound, finishing the regular season with a 3.01 ERA with eight wins and four losses throughout 21 starts, tossing in 116 and two-thirds innings.

As both teams use Jamsil Baseball Stadium as their home, all three games will be played at Jamsil.

The winner of this series will face the second-ranked KT Wiz in the second round of the postseason, starting on Nov. 9.