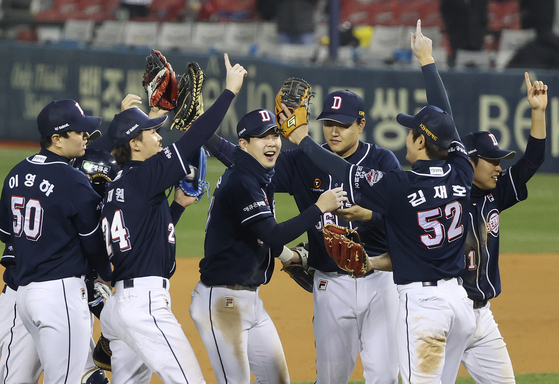 Doosan Bears players celebrate after picking up a 9-7 victory against the LG Twins at Jamsil Baseball Stadium in southern Seoul on Thursday. [YONHAP]


The Doosan Bears swept the LG Twins to earn a spot in the second round of the postseason on Thursday.

Playing Game 2 of the first playoff series, the Bears once again opened up the scoring by adding a run against Twins’ starter Tyler Wilson at the top of the second.

The Bears held on to that narrow lead until the top of the fourth, before pulling further ahead.

The top of the fourth inning started with the Twins giving up a walk to Kim Jae-hwan. Kim was quickly forced out but Heo Kyoung-min managed to get to second base. With a single from Park Sei-hyok, Heo added the Bears’ second run of the game. The Bears continued to pile on the runs, totaling seven for the inning including a two-run homer from Oh Jae-il.

Despite the Bears’ early dominance, the Twins quickly bounced back.

At the bottom of the fourth, they added two runs with back-to-back solo home runs from Roberto Ramos and Chae Eun-seong. At the bottom of the fifth, the Twins once again fought back with Kim Hyun-soo’s two-run homer, forcing the Bears to take Raul Alcantara off the mound.

With Lee Hyun-seung taking over pitching duties for the Bears, the Twins immediately added another homer from Ramos, cutting the Bears’ lead down to 5-8.

The Twins continued their streak in the sixth. After grabbing the first out count with a fly out, Bears pitcher Choi Won-joon gave up a walk to pinch hitter Shin Min-jae.

The Bears changed pitcher again, this time bringing on Lee Seung-jin, but their bullpen woes continued. Lee gave up a walk to Hong Chang-ki and a double to infielder Oh Ji-hwan to allow the Twins to pull closer, with the score going into the seventh at 8-7 to the Bears.

While both teams struggled to add a run, the Twins made a crucial mistake at the top of the ninth.

Kim Jae-hwan was given a walk and lifted from the first base for pinch runner Lee Yu-chan. Then, Heo hit a successful sacrifice bunt that changed everything. As Twins pitcher Go Woo-suk made a throwing error, this allowed Lee to reach home while Heo headed to second. Thanks to the error, the Bears managed to finally extend their lead to 9-7.

The Twins never recovered and the Bears took the second game of the series.

As Alcantara wasn’t able to toss full five inning, Choi ended up picking up the win with Wilson taking the loss for the Twins. Throughout four and one third innings, Alcantara gave up four runs.

Behind the Bears' dominance, veteran Oh Jae-won once again proved his strength in the postseason.  Throughout the postseason series, Oh has a .500 batting average with four hits and four RBIs. He was named MVP for the series.

The two clubs have faced off in the postseason a total of five times and the record is now in the Bears’ favor with three wins and two losses. The last time the Twins won a postseason series against the Bears was all the way back in 1998.

With the win, the Bears will now be facing the second-ranked KT Wiz in the second round of the postseason, starting on Monday. The series will be played as a best-of-five.