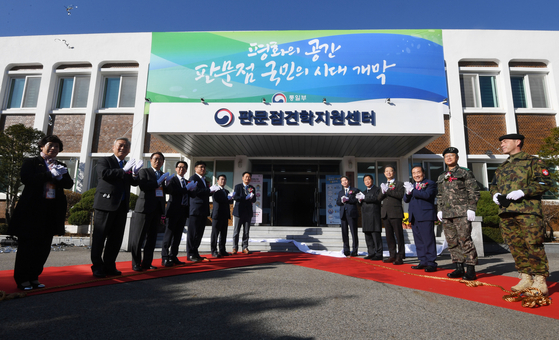 South Korean Unification Minister Lee In-young, fifth from right, attends the opening ceremony of the Panmunjom Tourist Support Center in Paju, Gyeonggi, on Wednesday, Nov. 4. The center, located outside the border village of Panmunjom, will be used to host tours to the Joint Security Area starting this week. [JOINT PRESS CORPS]


Minister of Unification Lee In-young said Seoul was ready to follow through on its peace initiatives with Pyongyang no matter the outcome of the U.S. presidential election, in remarks ahead of a ribbon-cutting ceremony to reopen tours to the truce village of Panmunjom.

“Political events like the U.S. presidential election and North Korean [ruling Workers’] Party convention scheduled for January have the potential to transform the situation,” the minister added.

Optimism was also the main theme of Lee's address delivered at Wednesday’s ceremony in front of dozens of foreign envoys.

Calling on the two Koreas to join hands once again to “design a new time of peace,” Lee underscored the symbolic importance of Panmunjom not only as the venue for the inter-Korean summit in 2018, but also as a lasting testament to how the two sides were respecting a military agreement to deflate tensions signed that same year.

The pact, known as the Comprehensive Military Agreement, was signed during the Koreas’ third summit that year in September, stipulating both sides demilitarize the border area and allow for free movement of personnel in the zone, also known as the Joint Security Area (JSA).

The two sides made initial progress in seeing through the plan, with the withdrawal of armaments in the JSA, but a subsequent chilling of inter-Korean ties has prevented the area from being used as a shared exchange zone as initially envisioned.

Lee acknowledged continuing difficulties in his speech, saying many challenges still remained toward reconciliation, but also noted Panmunjom “remains a basis of hope.”

The area, he proposed, can be used between the Koreas as a place to hold reunions of families divided by the Korean War (1950-53), and to experiment with free movement between personnel.

The minister went on to express hopes for revived dialogue between the two Koreas, which was halted in June over the issue of propaganda leaflets dispatched by South Korean activists across the border.

Pyongyang cut off phone links with Seoul and demolished the inter-Korean liaison office in Kaesong.

Calling the North Koreans “our beloved northern compatriots,” Lee implored Pyongyang to return to dialogue and re-establish the liaison office. 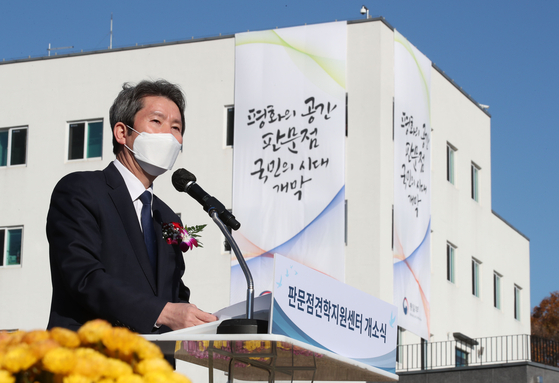 Unification Minister Lee In-young on Wednesday delivers an address at a ceremony to open a tourist support center for the resumed tours to Panmunjom. [JOINT PRESS CORPS]


The ceremony on Tuesday wrapped up with a ribbon-cutting ceremony for the new tourism support center near Panmunjom, which will serve as an entry point for tours into the truce village starting this month.

Following the ceremony, reporters in the press corps, including the Korea JoongAng Daily, were led on a tour of the JSA by officers of the United Nations Command, which oversees the demilitarized zone.

Notable sites covered by the tour included the iconic blue meeting houses standing atop the demarcation line, a tree planted by South Korean President Moon Jae-in and North Korean leader Kim Jong-un at their first summit in April 2018, as well as the footbridge on which the two leaders had a private conversation during that historic meeting.

Freedom House, the main South Korean building where the two Korean heads of state held their talks, also featured prominently on the tour, though areas on the North Korean side of the demarcation line remain inaccessible to South Korean tours.

No North Korean personnel stood watch on their side during Wednesday’s tour, though figures were spotted peeking at the visitors from the South through cameras behind windows.

Wednesday marked the first time tours were conducted in the JSA since they were suspended as a result of an African swine fever outbreak in the area in October 2019. The suspension was prolonged as a result of the ongoing coronavirus pandemic.

Applications for tours must be submitted at least two weeks ahead of the planned date, with persons over the age of eight being eligible. Visitors will be allowed to apply for the tours on an individual or family basis, as opposed to the past, when visitors had to join parties consisting of 30 to 40 people.

All visitors into the JSA must follow strict quarantine guidelines and are required to wear masks at all times. UN troops will also be responsible for their safety, and tourists must follow security rules outlined ahead of entering the area.