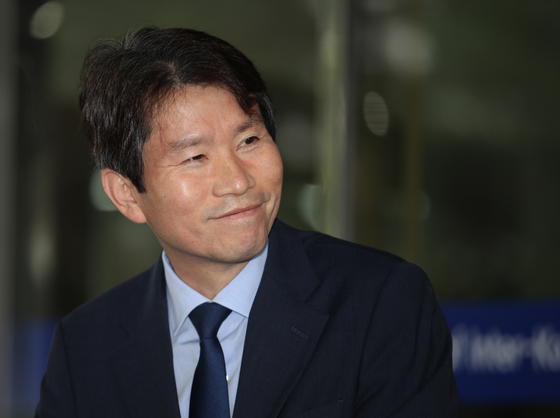 
Following a lawmaker’s complaint that Lee In-young, the president’s nominee to head the Unification Ministry, had refused to explain how he financed his son’s study abroad, the ministry said Monday that it plans on offering that information.

“We are working on it,” Unification Ministry spokesman Yoh Sang-key said Monday. “It will be submitted when it is ready.”

Rep. Kim Gi-hyeon’s complaint had called out the ministry for refusing to release information about Lee’s son because it was deemed too sensitive.

“We checked with the ministry officials, and they said they never said so,” Yoh said.

As part of a major shakeup of his national security team, President Moon Jae-in named Lee, a former floor leader of the ruling Democratic Party (DP), as his new unification minister on July 3. The National Assembly is scheduled to hold a non-binding confirmation hearing for Lee on July 23.

Kim, a lawmaker from the main opposition United Future Party (UFP), recently criticized the ministry’s team in charge of preparing for the conformation hearing as being uncooperative.

“They refused to offer basic information such as the reason for Lee’s son’s military draft exemption, how Lee had financed his son’s study abroad in Switzerland, how Lee had accumulated his wealth and the details of his tax payment records,” Kim wrote in a Facebook post on Sunday. “I asked why they are not offering the information, and they replied that the information is too sensitive.”

Kim said he told them that it is up to the National Assembly to decide whether the information is too private to make public or not, and that the ministry replied complaining that he was acting unreasonably.

Kim said there would be no need to hold a confirmation hearing if Lee refuses to submit basic information.

Kim added, “If you don’t want your private life to be scrutinized, you shouldn’t serve as the minister."

Yoh said Monday that the ministry has no power to deny a lawmaker’s demand to access information about a nominee, and gave assurance that the data will eventually be handed over to the National Assembly’s Foreign Affairs and Unification Committee.

“The ministry must offer complete information on why Lee’s son was exempted from military conscription and how Lee was able to finance high expenses for his son’s study in Switzerland,” Kim said.