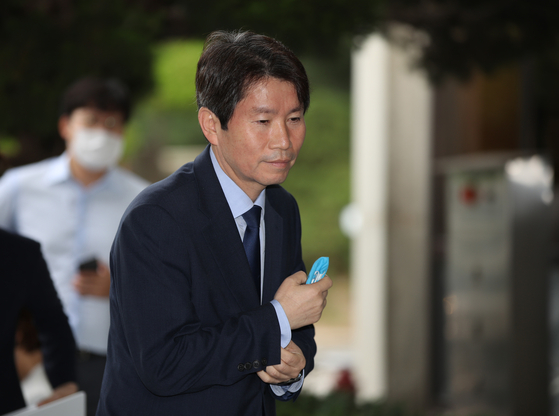 In a press briefing Wednesday, Unification Ministry Spokesman Yoh Sang-key revealed Lee, a four-term lawmaker of the ruling Democratic Party (DP), paid an annual total of about 10,220 Swiss Francs ($10,884) as yearly tuition fees for his son’s attendance at the Basel School of Design in Switzerland.

The revelation served as a rebuttal to local right-wing outlets, including the Munhwa Ilbo and Dong-A Ilbo, that claimed Lee had dished out more than $25,000 a year towards his son’s school, citing calculations made by conservative opposition United Future Party (UFP) lawmakers.

“We express regret at the fact that [the media outlet] distorted [the issue] with malicious intent, when the school in question’s tuition costs were clearly listed on its internet homepage as 5,000 Swiss Francs a semester, not $25,000 a year,” Yoh said.

According to official documents submitted as part of the nominee’s vetting process, Lee’s son attended a typography school in Korea before attending a yearlong program at the Basel School of Design.

UFP Rep. Kim Ki-hyun’s office had questioned the means by which Lee was able to afford his son’s education abroad, given that the nominee hadn’t yet submitted records of the schooling to the National Assembly in preparation for his hearing next week. The UFP further questioned whether Lee’s wife may have played a role in getting his son selected to study abroad as part of an exchange program between the typography school in Korea and the Basel School of Design.

The UFP also raised doubts about the grounds on which Lee’s son had been exempted from mandatory military service, which according to public records was due to a spine-related illness. The UFP argued that a video uploaded by Lee’s son on YouTube, showing him riding a go cart to promote a beer bar, showed he was physically fit to serve in the military.

The ministry, however, said the ailment still allowed Lee's son to perform regular activities and did not mean he was physically incapable of playing sports. Pushing back against another claim by the UFP, the ministry added in a statement that Lee’s son was not a professional racer.

The manner in which lawmakers dug into the minutiae of Lee’s family, despite a lack of incriminating evidence or any illegal conduct being alleged, testifies to just how no holds barred the legislative confirmation process into cabinet appointments have become.

Though the president is entitled to appoint any nominee to ministerial posts regardless of the legislature's input — except the position of prime minister — this did not stop the UFP into using the confirmation hearing process last year to mount an intense political attack against Cho Kuk, President Moon Jae-in’s pick for justice minister.

Cho was eventually appointed with Moon’s full backing, but the controversy over undue privileges Cho’s children received due to their parent’s influence led to a criminal investigation that ultimately jailed Cho’s wife and prompted his resignation just a month after taking office.