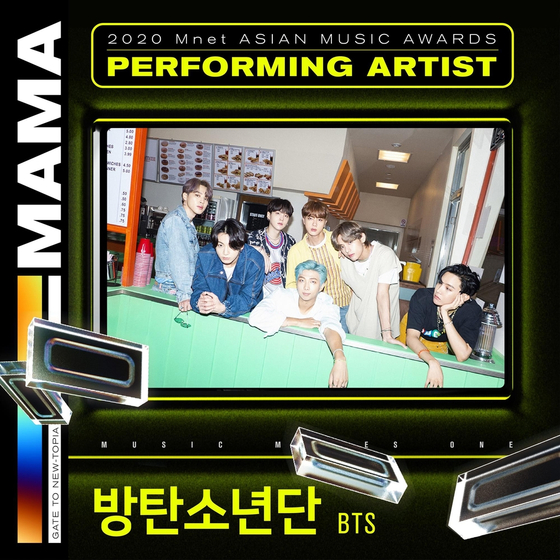 
BTS will perform at the 2020 Mnet Asian Music Awards, or MAMA for short.

The boy band will sing a new song from its upcoming album "BE, Deluxe Edition” to be released on Nov. 20, the organizer CJ ENM announced on Thursday.

This year BTS made history by remaining within the top 10 on Billboard’s Hot 100 singles chart for nine weeks, topping the chart three times and ranking No. 2 four times, with its hit single “Dynamite.”

MAMA opened online polls Oct. 29 for Asian music enthusiasts all over the world to vote for their favorite artists. As of Thursday morning, more than 154 million people had cast a vote.

Marking its 12th anniversary this year, MAMA is a global music awards ceremony hosted by CJ ENM. It started out as Mnet's "Video Music Awards" in 1999 and changed the name to MAMA in 2009. This year, various new technologies will be applied to keep infection risks low amid the Covid-19 outbreak.

At last year's MAMAs, the group took home nine awards including the four major ones — Artist of the Year, Song of the Year, Album of the Year and Worldwide Icon of the Year — at the ceremony held at the Nagoya Dome in Nagoya, Japan.