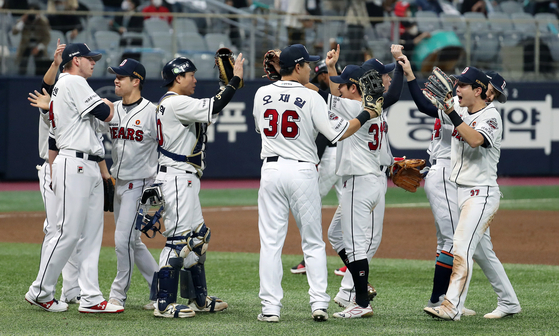 The Doosan Bears celebrate advancing to the Korean Series with a 2-0 victory over the KT Wiz in Game 4 of the second round of the postseason at Gocheok Sky Dome in western Seoul on Friday. [NEWS1]


The Doosan Bears have done it again.

In Game 4 of the second round of the postseason, the Bears picked up a 2-0 victory to advance to the Korean Series for a sixth straight year. While the KT Wiz came out to the field strong after picking up their first-ever win in the postseason in Game 3, defeating the Bears 5-1, Friday's game came down to just one hit.

Both teams started things off with their fourth starters on the mound — Yoo Hee-kwan for the Bears and Bae Je-seong for the Wiz — but Yoo didn’t get off to the best start, allowing the Wiz to get three batters on base at the top of the first. An incredibly close play at the plate with fantastic throws from Jung Soo-bin and Choi Joo-hwan was the only thing that saved Doosan from falling behind before the game had really got started.

Due to this, Yoo left the mound without even tossing one full inning.

Bae, on the other side, also only managed to toss two and two thirds innings.

With both teams struggling to score, it came down to the bottom of the fourth. With Kim Jae-hwan already on base, Choi stepped up to the plate to deliver the biggest hit of the night — a two-run homer straight over the right fence.


The Wiz were hoping to bounce back but as their bats once again stayed silent throughout the remaining innings, their first-ever postseason campaign ended with just one win in four games.

With the victory, Bears pitcher Kim Min-kyu picked up a win by tossing four and two thirds innings. Throughout it, he gave up a walk and a hit while striking out four. Kim arose as a surprise superstar in the postseason, having only made 29 appearances throughout the regular season.

Chris Flexen, who appeared as a relief pitcher after starting in the first game of the series, was named series MVP.

Although the Wiz lost the postseason series, they still managed to pick up a win, in Game 3.

With a record of three wins and a loss, the Bears are back in familiar territory, returning to the Korean Series for the sixth year in a row. The Bears are the defending champions, looking to go two in a row and looking to pick up their fourth title in six seasons.

The Bears will now face the top-ranked NC Dinos, starting Tuesday, Nov. 17. Looking at the two’s 2020 regular season head-to-head record, the Dinos are ahead of the Bears with nine wins and seven losses.

However, with the Bears’ experience, it seems like anything can happen at this point. The Bears have also now played two rounds of the postseason, winning five of six games,  and have built up some serious momentum heading into the series.


But that doesn’t mean that the Dinos aren’t ready. While the Bears are at the peak of their performance, the Dinos have had weeks to rest and prepare.

This is the Dinos' second time advancing to the Korean Series and the Changwon club has a score to settle. Back in 2016, the Bears swept the Dinos in four straight games to take the title.

This season, the spotlight will be on the two teams’ catchers. Back in 2016, Yang Eui-ji was one of the stars of that Doosan squad, but this year he'll be behind the NC plate.


Once again, all the Korean Series games will be played at Gocheok Sky Dome in western Seoul.