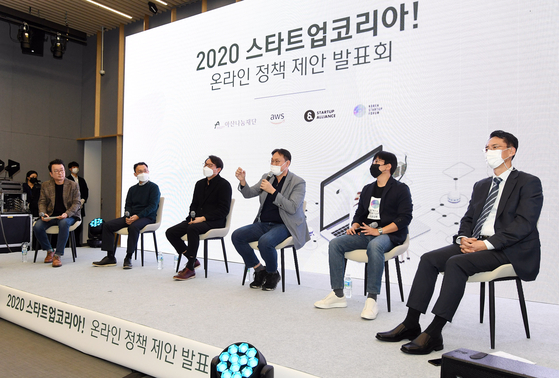 
Korea boasts the world’s highest penetration rate of smartphones and leadership in 5G networks, factors that have contributed to the rapid growth of digital-based businesses. But a major speedbump remains, and that's red tape.

Korea is the only country among the world’s top 15 by GDP to completely ban telemedicine practices. Unlike the United States and Britain, Korea has not adopted electronic discovery processes, or e-Discovery, in law suits, which allows parties to exchange evidence in electronic form.

These are a few of the regulatory hurdles described in a report published by Bain & Company, Amazon Web Services and three local nonprofit support organizations, Thursday.

“One favorite competition that arises whenever start-up founders gather in any given place is fighting over who suffers from the strongest regulations,” said Choi Sung-jin, executive director of the Korea Startup Forum during a panel discussion aired online Thursday.


The study focused on five areas where local regulations were worse compared to other advanced economies. Among them, telemedicine and legal tech were segments where Korea was completely missing out on global trends.

Discussions about deregulating telemedicine started in Korea two decades ago. But no telemedicine project has gone beyond the pilot stage. Doctors are against the idea because of a peculiarity to the Korean medical system. Korean law allows patients to go to large medical institutions like university hospitals instead of local doctors, and that is a widespread preference. Doctors have argued that under this system, local doctors will lose patients that seek remote medical services from larger institutions.

A breakthrough came this year with, of all things, the Covid-19 pandemic. Due to the crisis, the government granted some phone call diagnoses. MobileDoctor’s co-CEO Oh Nam-soo, however, said this was merely a baby step, and there was much more deregulation needed.

“There were great expectations that the temporary relaxation would create big opportunities," he said. "But in reality, the number of telemedicine consultations sought from local doctors was only one-tenth compared to large institutions. This proved that the doctors' concerns were valid.


“I think it’s more of a lack of consensus than a regulation issue," he continued. "Doctors are the providers of medical services and they need to be a part of the legislation process."

For policy advice, the report suggested the government come up with a detailed road map on how telemedicine would be implemented in this country and make sure that doctors are a part of that legislation process.


Another area in which strides have been made in other countries but not Korea is legal tech. The term refers to using technology for legal services, including finding a lawyer, analyzing legal documents and predicting trial results using artificial intelligence (AI) technology.

“There were about 1,500 legal tech start-ups in the United States as of 2016 — it was one of the most popular IT fields when the fourth industrial revolution was a hot topic,” said Im Young-ik, an attorney and CEO of Intellicon, which develops law-related technology that used AI. “The driving force behind it was fully disclosing a database of law suit documents to the public.”


According to the report, only 3 percent of Supreme Court judgements are available to the public for free online. For lower-court judgements, that number falls to 0.003 percent. Unlike the United States or Britain, Korea law doesn’t force parties in civil suits to share evidence electronically, which would serve as a vast database to develop AI algorithms, according to Im.


“Despite having very similar legal markets, Japan has three legal tech unicorns and Korea has none due to data and lawyer-related regulations,” Im pointed out.

“But asking for a change in the law won’t do much. The approach we should take is recognizing start-ups’ potential contribution to the country’s economy and establish a new set of laws that would work in our favor. That would create the legal basis to fight authorities that defend [old] regulations.”


As for other existing obstacles, the Thursday report noted that Korea's online platform law targeting services like delivery apps does not match the circumstance of IT start-ups as it was based on regulations for brick-and-mortar businesses. Korea has a small number of AI engineers and needs more government-funded programs to increase them, it added.


It also touched on the network separation law — a peculiarity to Korea — that obliges finance-related companies to keep an internal network with no external access to deal with sensitive information, particularly those regarding clients. That involves costs and procedures that small start-ups can't afford, the report said.

LG U+ and KVIC to cooperate on nurturing start-ups