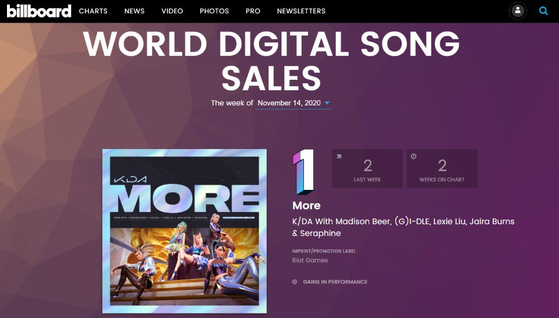 
Virtual girl group K/DA has reached the top spot of Billboard’s World Digital Song Sales chart with its title track “More” from the group’s first EP “All Out."

The girl group is made up of four characters from online game League of Legends (LoL) by Riot Games. The EP was released on Oct. 29 to signal the comeback of the group after two years.

The music video of the song “More” was streamed 1.2 million times on the first day of the release, and 3.3 million in total for the first 10 days.

The group has garnered attention as the voices of the characters are international talents — Soyeon and Miyeon from K-pop girl group (G)I-DLE as well as American pop singer Madison Beer and Jaira Burns. Lexie Liu also featured on the song.