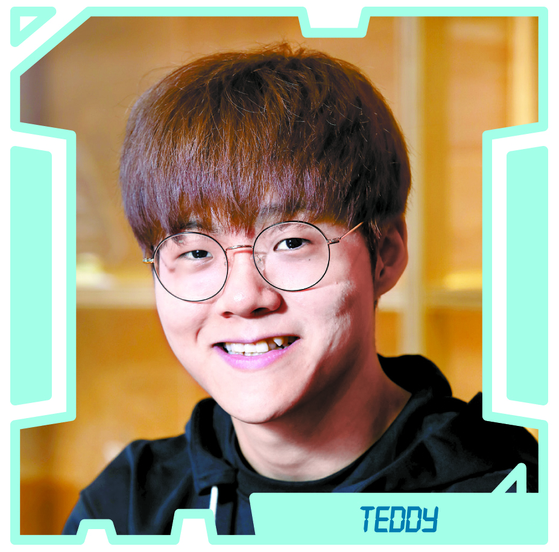 
Among the five members of the T1 team, Park Jin-seong, better known by his handle Teddy, is one of the most famous faces.

Despite only being with T1 since November 2018, Park is an established figure in the Esports world, having played for three other professional teams before joining T1. Among gamers, Park is famous for setting the record for the highest "creep score" in a professional game, at 1,456. A creep score is a measure of a specific kind of in-game kills.

As well as his longevity and records, Park is also known for two other things — his catchphrase and his handle.

Park's catchphrase, "Let's get it," is such a well-known feature of T1 gameplay that CEO Joe Marsh has also adopted the phrase and uses it to fire up the players before each game.

But Park's handle has a gentler backstory.


“I was told to create a nickname,” Park says. “But I couldn’t really think of anything. I used to hug a teddy bear when I sleep and to be honest, I still do. So I named myself Teddy.”


Park has, at times, regretted taking his professional handle for a game that's mainly about killing things from a cuddly toy, but after all these years he still isn't ready to say goodbye to Teddy.

And it has been a long career, Park was offered the opportunity to turn pro back in 2015 and he jumped at the opportunity. As a teenager being offered the chance to make money from gaming, Park was pretty enthusiastic about his new career. His mother needed a bit more convincing.

“I wasn’t really that serious,” Park says. “Since I was young at the time, I thought everything was going to go well no matter what.”


Park may not have given much thought to the early days of his career, but it seems to have worked out all right. Looking back, Park says he has never regretted his decision to turn pro.

Like other sports, professional gamers can spend years working away on the sidelines before they get their time in the starting squad. Park is no exception, having served his time as a practice player before finally making it onto the main stage.

Park considers that time a learning process, rather than a reflection on his ability. While there are no regrets attached to those early days, the 22-year-old says that the summer season that has just passed was definitely a slump.


“This past summer was pretty difficult,” Park says. “I think I have some regrets because I don’t think I played that well.”

Due to his poor performance over the summer, Park says he is still looking to bounce back.

“I think I wasn't able to recover [from the slump] this summer,” Park says. “So I think I need to play well next year.”

After a relatively long and varied career, playing for T1 holds a special meaning for Park.