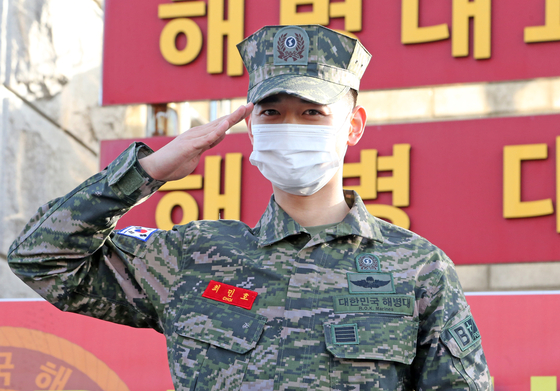 SHINee's Minho was discharged from the military on Sunday. [YONHAP]


Minho of boy band SHINee was discharged from the military on Sunday after completing his mandatory service in the Marine Corps.

“Thank you all for waiting for me while I was serving my military service,” Minho said to his fans who came to celebrate his discharge. “I will continue doing my best as a Korean man who has done his duty.”

Minho could have been discharged from his service on Oct. 27 after the decision was made to allow soldiers to use their remaining vacation days in exchange for early discharge due to the coronavirus.

However, he decided to stay until the final day of his service to participate in the Marine Corps’ upcoming defense drill to be recognized as an “exemplary marine solider” by the Republic of Korea’s Marine Corps.