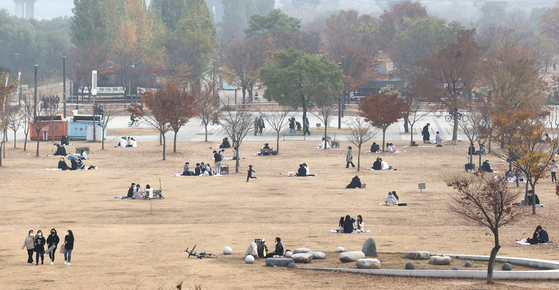 Health authorities Sunday issued a so-called preliminary warning for the Seoul metropolitan area and Gangwon, saying it was time to “seriously review” the option of upgrading to the second level of the five-tier social distancing system.

The grim outlook came as new cases of the coronavirus surpassed 200 over the weekend, reaching 191 last Thursday, 205 on Friday and 208 on Saturday. The last time Korea saw over 200 cases in a day was early September.

While presiding over a meeting of the Central Disaster and Safety Countermeasure Headquarters in Seoul, Prime Minister Chung Sye-kyun urged the public to refrain from holding year-end social gatherings and events, saying the get-togethers had serious risks of further spreading the virus. 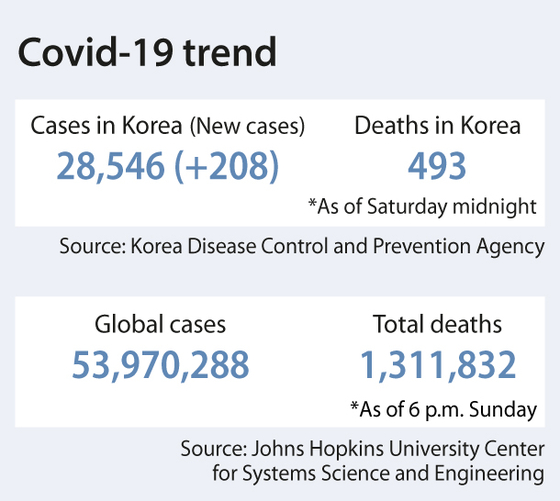 The Seoul metropolitan area encompassing Seoul, Incheon and Gyeonggi has yet to meet the central government’s social distancing criteria of Level 1.5, but Gangwon has already satisfied them all, which is why the northeastern province is more likely to become the first region to be officially designated a Level 1.5 zone by central health authorities.

The five levels in the new social distancing system, which launched on Nov. 7, are Level 1, 1.5, 2, 2.5 and 3. Central health authorities decide social distancing levels, but local government offices have the authority to change their regions' level up to Level 2.5 after consultation with central health authorities, which is what the cities of Cheonan and Asan in South Chungcheong, Wonju in Gangwon and Suncheon in South Jeolla have done so far to put themselves under Level 1.5 measures.

The rest of the country is currently subject to Level 1 measures, as imposed by the central government.

In the new social distancing scheme, the country is divided into seven areas, with each zone being monitored separately. Each also has its own criteria to be classified as Level 1.5.

One criterion has to do with the number of new patients per day on average over the past seven days. In the Seoul metropolitan area, that threshold is 100 patients, which means if there have been an average of 100 patients or above in Seoul, Incheon and Gyeonggi combined per day over the previous seven days, the central government can enforce Level 1.5 restrictions. In Gangwon, the threshold is 10 patients.

At Level 1.5, customers at noraebang (singing rooms) can’t eat inside the facilities, and dancing or table-hopping are strictly forbidden in clubs and other nightlife businesses. Promotional halls of door-to-door sales businesses have to close after 9 p.m., and only one person is allowed per 4 square meters (43 square feet) of surface area in noraebang, wedding halls, funeral halls and public bathrooms — which essentially means fewer people are allowed to enter at a time.

Restaurants and coffee shops that have a surface area of 50 square meters or more also must space out their customers by at least a meter, or keep every other seat or table empty.

Of Saturday’s new coronavirus cases, 176 were local infections, according to data from the Korea Disease Control and Prevention Agency (KDCA): 81 in Seoul, 41 in Gyeonggi, 19 in Gangwon, eight each in North Chungcheong and South Jeolla, seven in Gwangju, five in South Chungcheong, three in South Gyeongsang and two each in Incheon and North Gyeongsang.

Out of 32 imported cases, eight were from the United States, seven from Russia, five from Uzbekistan, two each from Germany, Poland and Mexico and one each from the Philippines, India, Kuwait, Bangladesh, France and Hungary.

One patient died, bringing total deaths to 493, while 55 patients recovered, raising total recoveries to 25,691. As of Saturday at midnight, Korea had counted a total of 28,546 patients.