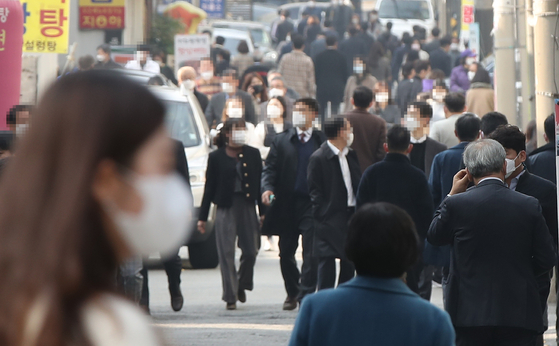 A street in Seocho District, southern Seoul, fills up during lunchtime Monday amid warnings from central health authorities about the greater Seoul area being elevated to Level 1.5 measures. [YONHAP]

Korea added 223 coronavirus cases Sunday, the highest increase in over two months and the third day in a row that daily infections surpassed 200.

The Korea Disease Control and Prevention Agency (KDCA) said Monday morning that 223 people were diagnosed with the virus the day before, up from 208 Saturday. Daily cases have been steadily climbing since last Thursday, when 191 people were confirmed, followed by 205 Friday.

With most cases coming from the greater Seoul area encompassing Seoul, Incheon and Gyeonggi, health authorities Sunday issued a so-called preliminary warning for the region, saying it was time to “seriously review” the option of upgrading to the second level of the five-tier social distancing system. The northeastern province of Gangwon, which has also been seeing a bump in cases lately, was slapped with a preliminary warning as well.

A preliminary warning is normally issued by the central government when a region meets at least 80 percent of the government’s criteria to be raised to the next social distancing level. It acts as a clarion call for the public to comply more attentively with health guidelines, and cautions businesses to be prepared for some restrictions.

The greater Seoul area has yet to satisfy the central government’s criteria to be elevated to Level 1.5, but Gangwon already has. Despite so, health authorities refrained from designating Gangwon a Level 1.5 area Monday, citing negative impacts that Level 1.5 restrictions would have on the local economy.

The central government decides social distancing levels for each region of the nation, but local government offices have some discretion to adjust their levels after consultation with central health authorities, which is what some cities have done so far to raise themselves to Level 1.5 measures, including Cheonan and Asan in South Chungcheong; Wonju in Gangwon; and Suncheon, Gwangyang and Yeosu in South Jeolla. 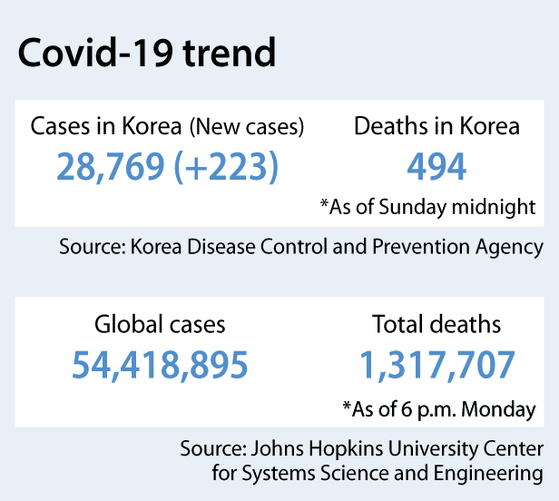 Yet no area has been officially classified as Level 1.5 by the central government. Other than the self-imposed Level 1.5 areas, the rest of the country remains at Level 1.

Kim Sung-ho, vice governor for administrative affairs of Gangwon, said in a press briefing Monday that the provincial government office wasn’t going out of its way to put the entire province under Level 1.5 restrictions because infections were coming from very few areas, while others were seeing zero cases.

According to the basic guidelines of each social distancing level introduced by central health authorities earlier this month, at Level 1.5, customers in noraebang (singing rooms) can’t eat inside the facilities, and dancing or table-hopping are strictly forbidden in clubs and other nightlife businesses. Only one person is allowed per 4 square meters (43 square feet) of surface area in noraebang, wedding halls, funeral halls, public bath houses and other businesses, which essentially means fewer people are allowed to enter at a time. Restaurants and coffee shops that have a surface area of 50 square meters or more also must space out their customers by at least a meter, or keep every other seat or table empty.

The Ministry of National Defense announced Monday it would pre-emptively impose Level 1.5 measures on troops in the greater Seoul area and Gangwon from Tuesday to Nov. 29. Events, meetings and business trips will be minimized, and participation in religious activities will also be restricted, the ministry said. Soldiers will still be allowed to go on vacations and leave their bases for outings.

Of Sunday’s nationwide 223 coronavirus cases, 193 were local infections: 79 in Seoul, 39 in Gyeonggi, 20 in Gangwon, 13 in North Gyeongsang, 10 each in Incheon and South Jeolla, six in South Chungcheong, four each in Gwangju and South Gyeongsang, three in North Chungcheong, two in Daejeon and one each in Sejong City, North Jeolla and Jeju Island.

Out of 30 imported cases, 18 were from Russia, four from the United States, two each from Nepal, Myanmar and Indonesia and one each from Germany and Bulgaria, according to data from the KDCA.

Most cases from Russia were traced to ships docked at Busan Port.

One patient died Sunday, raising total deaths to 494, while 68 patients recovered, bringing total recoveries to 25,759. As of Sunday at midnight, Korea had counted 28,769 patients in all.