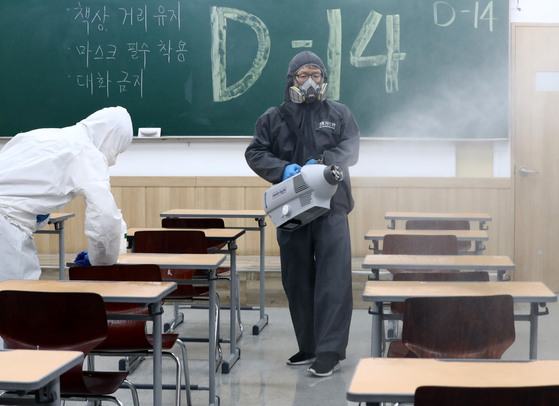 The number of newly confirmed coronavirus cases rose again Wednesday for the seventh consecutive day to reach 343, as Level 1.5 social distancing measures kicked off in Seoul and Gyeonggi.

It was the second time Korea’s day-to-day infections surpassed 300 in nearly three months, after 313 cases were registered Tuesday.

Compared with Tuesday, domestic infections increased by 47 Wednesday, while imported cases decreased by 18.

Among the country’s 17 major cities and provinces, Ulsan, Sejong City and Jeju Island were the only places that didn’t register a single new virus case Wednesday, according to data from the Korea Disease Control and Prevention Agency (KDCA).

The remaining 50 cases were imported: 20 from Russia, 10 from the United States, six from Egypt, five from Turkey, four from Argentina and one each from Myanmar, Indonesia, Kazakhstan, Belgium and Hungary.

Two patients died Wednesday, raising total deaths to 498, while 125 patients recovered, bringing total recoveries to 26,098. As of Wednesday at midnight, Korea had counted 29,654 coronavirus patients in all.

During a Thursday meeting of the Central Disaster and Safety Countermeasure Headquarters, Minister of Health and Welfare Park Neung-hoo sounded alarm bells for a possible large-scale outbreak, saying “nowhere” in Korea was currently safe from the virus.

Park urged the public to practice social distancing for the next two weeks as Seoul, Gyeonggi and several other places go through Level 1.5 restrictions. 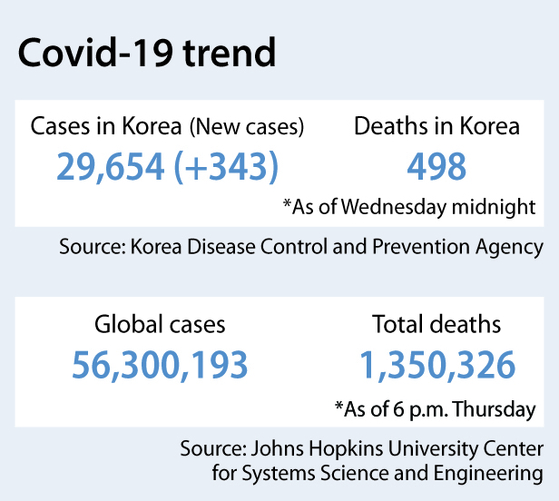 Incheon’s Ganghwa County and Ongjin County, which are barely seeing any new cases, will remain at Level 1.

The new restrictions will last until Dec. 2, after which the central government will decide whether to bring the social distancing level back to Level 1 — or if the situation worsens, crank it up to Level 2.

Some cities have gone out of their way to self-impose Level 1.5 social distancing measures as a precaution, and freshly added onto that list Wednesday midnight were Gwangju and Cheorwon County, Gangwon.

Arguably the strictest measure in Level 1.5 is that dancing and table-hopping in clubs and other nightlife businesses are forbidden, while eating is not allowed in noraebang (singing rooms). Other crowded facilities such as restaurants, cafes and movie theaters have to space out their customers, but many businesses have already been practicing those requirements since the previous Level 1, which is why some experts claim the central government should go further and pre-emptively enforce Level 2 restrictions in Seoul and Gyeonggi to bring daily cases down.

In Level 2, bars and other nightlife businesses have to close, while restaurants can only offer takeout service after 9 p.m.

The city government of Suncheon in South Jeolla announced Thursday afternoon that it would self-impose Level 2 measures from Saturday, becoming the first city to do so ever since the central government introduced the new five-tier social distancing system on Nov. 7.

Suncheon was one of the first cities to self-impose Level 1.5 measures after seeing a bump in coronavirus cases, mostly traced to local chains of infections. A cluster of 10 virus cases emerged in a small village this week.