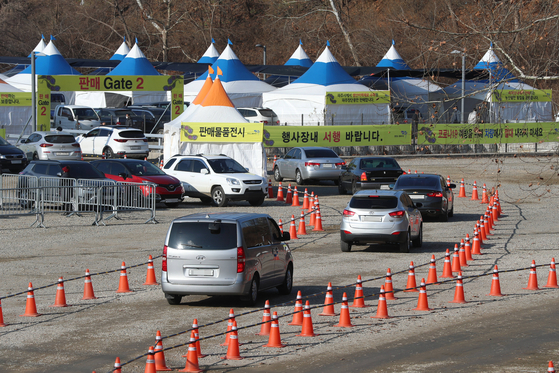 Cars line up Friday to buy soybeans at this year’s Paju Jangdan Soybean Festival in Paju, Gyeonggi, which was converted to a drive-through event amid the pandemic. [YONHAP]

Korea added 569 new cases of the coronavirus Thursday, the second day in a row that daily infections exceeded 500.

Thursday’s figure was slightly lower than Wednesday’s 583 cases, but not low enough to ease panicky health authorities who are wondering if the greater Seoul area encompassing Seoul, Incheon and Gyeonggi may have to be elevated to the next social distancing level, Level 2.5.

Level 2.5 is the fourth-highest level in the five-tier system.

Of Thursday’s 569 new cases, 525 were domestic infections: 204 in Seoul, 112 in Gyeonggi, 38 in South Gyeongsang, 31 in South Chungcheong, 24 each in Busan and North Jeolla, 21 in Incheon, 19 in North Chungcheong, 13 in Gwangju, 10 in South Jeolla, eight in Gangwon, seven in Ulsan, five in Daejeon and three each in Sejong City, North Gyeongsang and Jeju Island.

Among Korea’s 17 major cities and provinces, Daegu was the only region that didn’t register a single new case Thursday, according to data from the Korea Disease Control and Prevention Agency (KDCA).

Out of 44 imported cases, 14 were from the United States, eight from Austria, seven from Sweden, five from Brazil, three from Indonesia, two from Gibraltar and one each from the Philippines, Greece, the Czech Republic, Canada and Ethiopia.

One patient died Thursday, bringing total deaths to 516, while 153 patients recovered, raising entire recoveries to 27,103. As of Thursday at midnight, Korea had counted 32,887 coronavirus patients in all.

Korea has seen 407 patients per day on average over the past week. About 71 percent of those cases were in the greater Seoul area.

Health authorities Friday afternoon refrained from saying whether the social distancing level for the greater Seoul area would be elevated to Level 2.5 soon, but mentioned that a decision will likely be made Sunday after discussing the matter with experts.

Until then, Sohn Young-rae, a spokesperson for the Central Disaster Management Headquarters, urged the public in a briefing to cancel all social activities and stay at home.

“Meeting with your friends and family to eat together especially has very high risks [of spreading or catching the coronavirus] so please call off those gatherings,” Sohn stressed.

Numerous clusters across the nation added several more cases, but the biggest increase came from an aerobic center in Gangseo District, western Seoul, which added at least 63 new cases from Thursday noon to Friday noon, mostly from members, their relatives and friends. That cluster alone now has 129 coronavirus patients, making it one of the fastest growing clusters in the nation.