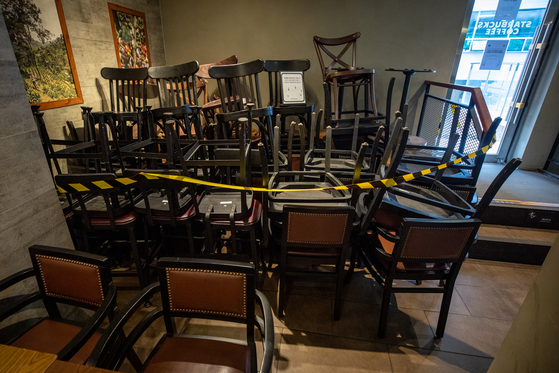 Tables and chairs are stacked at a coffee shop chain in downtown Seoul Sunday, the first day that the Seoul metropolitan area fell under more restrictions from the central government’s three-tier social distancing system. [NEWS1]

Saturday’s figure was lower than Friday’s 323 and Thursday’s 371, according to data from the Korea Centers for Disease Control and Prevention (KCDC).

Even as the number of new cases has been dropping lately, health authorities warned Sunday that it wasn't sinking fast enough, and that 21.5 percent of all new infections over the last two weeks were "traceless," which means it could not be determined where or how the patients got infected, raising concern of inadvertent transmissions.

With the majority of new cases still emerging in the greater Seoul area, especially the capital, Acting Seoul Mayor Seo Jeong-hyup on Sunday urged everyone to join the city’s “halt week” campaign this week, by canceling all social activities and refraining from leaving their homes until the current social distancing guidelines tentatively expire Sept. 6 at midnight.

The new guidelines for Seoul, Incheon and Gyeonggi were announced last Friday by the Korean central government, a day after health authorities announced that 441 new cases of the coronavirus were counted Wednesday, nearly a six-month high.

The central government said that while the entire nation will remain under Level 2 guidelines in the three-tier social distancing system for another week until Sept. 6, some new restrictions were being added for the greater Seoul area — mostly tweaked versions of rules for Level 3.

The local media has been calling these new rules "Level 2.5."

Minister of Health and Welfare Park Neung-hoo said in a Friday press briefing that imposing Level 3 on the country was "the last card" to use, considering how it would "cause immense damage to the local economy and people’s everyday lives."

By taking some of the third-level restrictions and imposing them in a limited fashion, Park said he hoped the latest outbreak will come under control.

If the number of new Covid-19 cases don’t go down despite the new measures on Seoul, Incheon and Gyeonggi this week, the health minister warned Level 3 would be imposed "immediately."

Under the new social distancing rules for the Seoul metropolitan area, only takeout orders will be permitted at all coffee chains, and visitors must write down their names, phone numbers and the time they visited the establishment before placing their orders.

Visitors to cafes that aren't chain stores can drink their beverages at a table until 9 p.m., though they must wear their face masks unless when they are drinking or eating. After 9 p.m., only takeout orders are allowed until 5 a.m.

In explaining why coffee chains were targeted, central health officials said Friday that the government feared too many businesses would be financially hit if the takeout-only order was imposed on all cafes. Officials said they also took into account the fact that many people spend a longer time in coffee chains, raising risks of virus transmission.

Restaurants and bakeries can offer normal services only until 9 p.m., after which only takeout orders will be allowed until 5 a.m. All indoor sports facilities, indoor golf practicing ranges and billiard halls will be shut, and so will day care centers. Hagwon, or private cram schools, with 10 students or more can hold online classes only. Visits to nursing hospitals and nursing facilities for the elderly will be banned as well.

Health authorities warned that any businesses that violate the strengthened rules could be forced to shut down or face fines of 3 million won ($2,500).

All these new measures in the Seoul metropolitan area will be enforced on top of the Level 2 social distancing guidelines that have been in place since Aug. 16 for Seoul and Gyeonggi, and since Aug. 19 for Incheon. The rest of the nation came under Level 2 on Aug. 23. 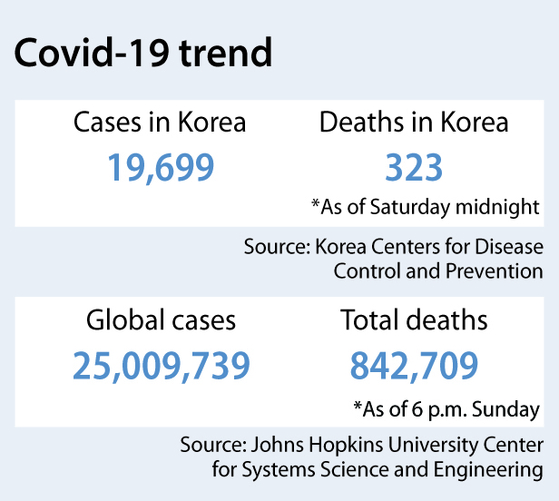 Sports games are held without any spectators, and all public institutions such as museums and libraries are closed as well.

Churches can only hold online services for their congregants, with up to 20 people physically allowed in the building at any given time to help produce those online materials.

With Korean college students set to start their second semester in the coming days, many universities that had announced a "blended learning" system for the second half of this year — a combination of online and offline learning — said they would stick to the remote learning system adopted in the first semester for at least a couple of weeks, hopefully until the outbreak subsides.

Of 299 new patients reported Saturday, 283 were identified by the KCDC as local infections, while the rest were imported cases.

Among the local infections, 114 were detected in Seoul, 77 in Gyeonggi, 30 in Daegu, 12 in Incheon, eight in South Jeolla, seven in South Gyeongsang, six each in Daejeon and Busan, five each in North Chungcheong and South Chungcheong, three each in Ulsan and North Gyeongsang, two each in Gwangju, Gangwon and Jeju Island and one in Sejong City.

Of Korea’s 17 major cities and provinces, North Jeolla was the only place that didn’t report a single new case Saturday.

Out of 16 imported cases, four were from the United States, three from Iraq, two each from the Philippines and India and one each from China, Kazakhstan, Indonesia, Russia and Mexico.

As of Saturday at midnight, Korea had counted 19,699 confirmed Covid-19 infections.

Korea’s second largest outbreak comes amid a nationwide strike by doctors, but no major disruptions in Covid-19 treatment have been reported. Hundreds of trainee doctors, including interns and residents, have been on an indefinite strike since Aug. 21 to protest the central government's planned package of medical school reforms.