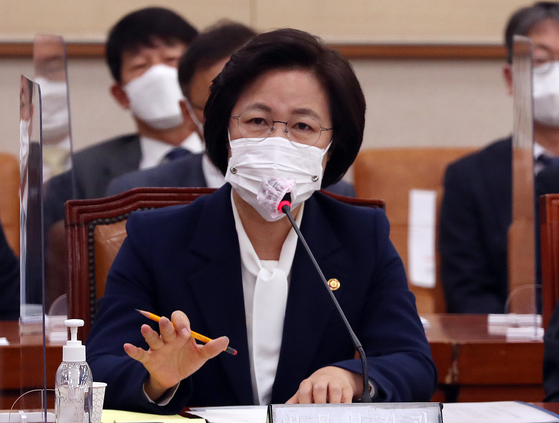 Justice Minister Choo Mi-ae speaks at the Legislation and Judiciary Committee of the National Assembly on Monday. [YONHAP]


Following a strong backlash from politicians and legal experts, Justice Minister Choo Mi-ae on Monday appeared to walk back her recent push to create a law that would compel criminal suspects to unlock their cell phones.

“We haven’t made a final decision to submit the bill,” Choo said during the National Assembly’s Legislation and Judiciary Committee.

Choo said the Ministry of Justice is currently studying ways to combat various digital crimes, and that no decision has been made on whether to submit a bill.

On Thursday, Choo ignited fresh controversy by ordering the ministry to prepare legislation to require Han Dong-hoon, a senior prosecutor and a suspect in an ongoing criminal investigation, to unlock his phone. Choo accused Han of “maliciously hiding the password of his mobile phone and obstructing the probe.”

The Seoul Central District Prosecutors’ Office has been investigating allegations of conspiracy between Han and Lee Dong-jae, a former reporter, to smear Rhyu Si-min, a liberal pundit with close ties to the Moon Jae-in administration. In July, the prosecution seized Han’s mobile phone, but has been unable to unlock it.

“The Constitution stipulates a suspect’s right to remain silent,” Konkuk University law professor Han Sang-hee said. “Choo’s order is a plan to create a law that directly defies this right. This is far more serious than what happened during the authoritarian regimes. If the country has this law, it is more powerful than torture.”

In a text message sent to reporters on Friday, Han said Choo is getting revenge on him. Han, a close associate of Prosecutor General Yoon Seok-youl, had led the probe last year into alleged financial and academic fraud by former Justice Minister Cho Kuk and his family. After Choo took office in January, Han faced a series of demotions and became a criminal suspect. 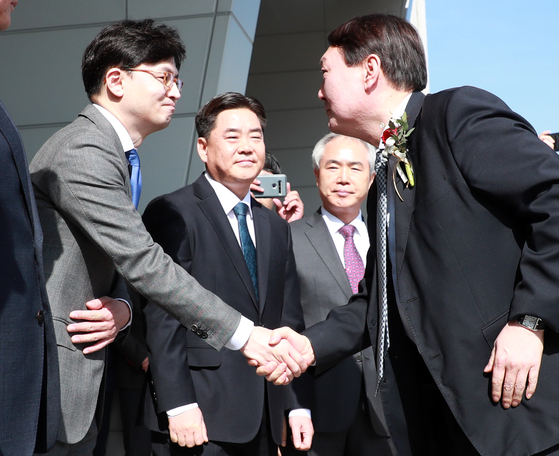 
The Ministry of Justice said Friday that Choo's intention was to find ways to counter new kinds of digital crimes, such as the recent "Nth room" case that centered on an illegal pornographic ring in an online messaging app.

In a Friday Facebook post, Choo noted the British government has introduced the Regulation of Investigatory Powers Act (RIPA), which enables public authorities to demand that someone hand over the keys to protected information. Any disobedience can be punishable with imprisonment.

Their explanations did little to ease the outcry from lawyers and politicians.

The Korean Bar Association on Monday issued a statement demanding the justice minister stop the proposal, which said defies the Constitution, calling Choo’s plan a “direct threat to the rule of law.”

“We are deeply concerned about Choo’s order to the ministry to draft a bill that would violate human rights,” the Seoul Bar Association also said in a statement. “The justice minister has the duty to protect the people’s human rights, but she is leading an attempt to infringe upon the people’s rights in order to strengthen the prosecutors’ investigative powers.”

“Clause 2 of Article 12 in the Constitution stipulates that no citizen shall be tortured or be compelled to testify against himself or herself in criminal cases,” the association said. “The Constitution also stipulates the principle of presumption of innocence. The criminal justice system bars any attempt to compel a confession and guarantees a suspect’s defense rights. Choo’s order defies all of them, and it is extremely unjust.”

Park Jong-woo, president of the Seoul Bar Association, expressed concerns that Choo was trying to introduce the law to go after a specific target. “The RIPA is exercised with strict guidelines only when the case concerns national security or crime prevention,” Park told the JoongAng Ilbo. “Choo’s latest remarks and behavior are inappropriate because she is the minister of justice, who should be the final bastion of our society’s justice.”

The Lawyers for a Democratic Society, also known as Minbyun, demanded that she immediately withdraw her plan. The People's Solidarity for Participatory Democracy (PSPD), a liberal civic group and a powerful patron of the Moon administration, also said Choo’s plan runs counter to the government’s campaign to reform the prosecution.

Although the ministry is responsible for preventing the prosecution from infringing upon human rights during investigations, Choo actually made an order to the ministry to introduce this controversial bill only for one specific case, the PSPD said, questioning her political motive.

“What is the president wishing for by turning a blind eye to her lawless behavior?” Rep. Kim Eun-hye, a PPP spokeswoman, said Friday.

A senior member of the ruling Democratic Party (DP) said Choo has gone too far.

“In Korea, we have the right to refuse to make a self-incriminating statement,” Park Seong-min, a member of the DP’s Supreme Council, said during an interview with KBS on Monday. “Experts said prosecutors can freely launch investigations into new, separate charges when unlocking mobile phones became mandatory.”

Park denied that the DP, which controls the majority in the National Assembly, would eventually pass the bill, if it is submitted.

“The party did not formally endorse it,” she said. “Choo is pushing for it. It is too excessive to say that the DP will use the majority to ram it through.”

Meanwhile, Choo said Monday that she will not return to politics unless she completes the prosecutorial reform.

“I vowed to have no political ambition before completing the reform of the prosecution,” Choo said.

She has been rumored to be weighing a run for Seoul mayor or president.