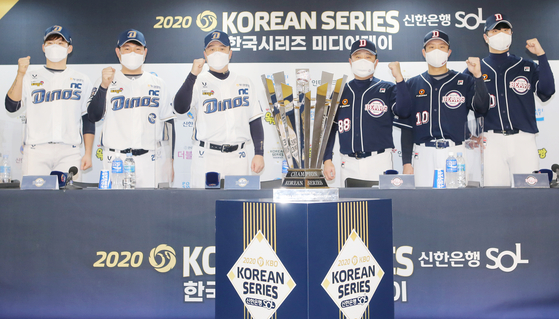 
The long-awaited 2020 Korean Series will finally kick off Tuesday.

The 2020 regular season champion NC Dinos and the reigning Korean Series champion Doosan Bears will face off in the best-of-seven series, held this year at Gocheok Sky Dome in western Seoul. With the season starting unusually late due to the coronavirus pandemic, the late postseason games have been held in the Sky Dome, the only dome in Korea, due to weather concerns. Neither team gets a homefield advantage.

This is a huge blow to the the Changwon-based team, the Dinos, as this is their first time advancing to the Korean Series since they opened their new stadium, Changwon NC Park, in March 2019.


“It is a little disappointing that we don’t get to play at home [in Changwon],” Dinos manager Lee Dong-woo said during the media day on Monday. “But we’ll be focusing on winning.”

With the game being played in Seoul, Doosan is expected to see more fans than NC as they are based in Jamsil, southern Seoul, but Bears manager Kim Tae-hyoung pointed out that while they may be in the same city, the Bears are in the same position as the Dinos — they're not at home.

This year's Korean Series will be the second time in recent years that the two sides have met in the championship. Back in 2016 the Bears swept the Dinos in four games to take the title.

But things are different this year. In 2016, the Bears were the regular season champions with a bye straight to the championship and the Dinos were a young squad in their first Korean Series.

This year, the Bears enter the series as the challenger. In the postponed 2020 season, the Dinos won the regular season by picking up 83 wins, six ties and 55 losses. With the team’s first regular season title, they earned a ticket straight to the Korean Series.

But while the Dinos got to rest a little, the Bears have been busy. Having finished the season third with 79 wins, four ties and 61 losses, the Bears had to battle through two rounds of the postseason to reach the championship series. They swept the LG Twins in a best-of-three series and then breezed past the second-ranked KT Wiz with a record of three wins and a loss.

As the Bears were able to see off the Wiz in four games, they did get to rest a little.

Despite the Bears being the challenger this year, the Dinos manager isn’t thinking that this is going to be an easy series, as the Bears are still the team to beat in the KBO postseason. The Seoul club are the current reigning champions and have now reached the championship series for six straight seasons. The majority of the squad is unchanged, meaning that the players have a significant amount of postseason experience.

But that experience comes at a price. Although nearly all of the Doosan squad were members of the team when they picked up their last three Korean Series titles, they may not be for much longer. The Bears are expected to have the most free agent players once the 2020 season ends, so this really could be one last hurrah for the current squad.

Due to this, Kim said that he’s heard his players talking about finishing strong with the current members, for the last time.

“I’ve heard the players talk about it, but for the managers, we have to come up with the best lineup with the players we have,” said Kim. “We’ll try our best until the end.”

When it comes to leaving, the Bears aren't the only team with players on the line this year. The Dinos' Na Sung-bum has made it clear that he hopes to head to the majors after this season. Aware that this might be his last season in the KBO for some time, manager Lee said that he has set high expectations for Na.

The two clubs’ catchers have also received a lot of attention.

Dinos catcher Yang Eui-ji formerly played for the Bears and was a crucial part of their championship-winning squad, including in 2016 when the Bears swept the Dinos. At the time, Park Sei-hyok, who is now the Bears’ starting catcher, was the backup catcher.

When Yang left Doosan two years ago it looked like their winning days might have been over, but Park immediately stepped into Yang's shoes and became a crucial part of the Bears squad that won the Korean Series last year.


Yang isn't the only link between the two teams. When the Bears defeated the Dinos back in 2016, Dinos manager Lee was actually working as a Bears coach, under manager Kim.


Considering how well the two teams know each other, the Korean Series is expected to be an interesting one this year.

In Game 1, which can be one of the most important in the best-of-seven series, the Bears will start things off with starter Raul Alcantara while the Dinos will start Drew Rucinski.

Alcantara has had quite a season, picking up 20 wins and only two losses throughout 31 starts to finish with a 2.54 ERA.

Although he hasn't proven as threatening in the postseason, he's slowly picking up his pace. During the first round of the postseason, Alcantara only tossed four and one-thirds innings with a 8.31 ERA. In the second round he was significantly better, tossing seven and two-thirds innings for the Bears, giving up three runs to finish with a 3.52 ERA.

While Alcantara has had a few games to find his feet, starting in Game 1 of the Korean Series will be Rucinski's first appearance in the postseason. The second-year KBO player had quite a 2020 season, picking up 19 wins and five losses throughout 30 starts to finish the regular season with a 3.05 ERA.