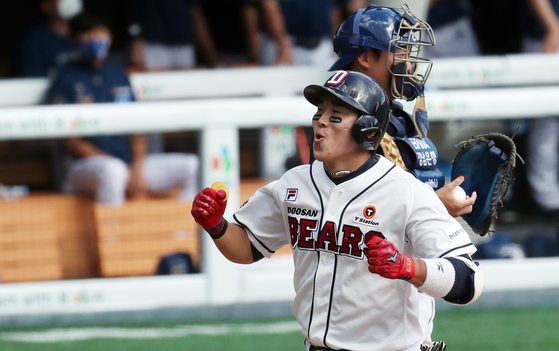 Heo Kyoung-min rounds the bases after hitting a three-run home run against the NC Dinos at Jamsil Baseball Stadium in southern Seoul on Wednesday. [NEWS1]

After spending months as a disappointing shadow of their former selves, the Doosan Bears have shot up the table over the past week, jumping from seventh to fourth with a five game winning streak that has not only thrown them deep into playoff contention, but also raised the pressure on the top three clubs.

The Bears have always been a fall club. The Seoul club often comes alive as the mercury drops, making it a last-minute push for the postseason. Doosan have qualified for the playoffs in eight of the last ten seasons, reaching the Korean Series seven times and winning it three times. Last season, the Bears jumped from fifth to third on the very last day of the season.

This year, Doosan are doing it again.

On Sept. 16, Doosan were sitting in seventh place behind the SSG Landers in sixth, Kiwoom Heroes in fifth and NC Dinos in fourth. A 7-2 win over the Landers on Sept. 17 pushed Doosan up to sixth going into the Chuseok holidays.

Over the weekend, the Bears took on the Heroes. The two teams tied on Saturday and the Bears took a 6-0 win on Sunday, allowing them to leapfrog the Heroes and take fifth place, the last playoff spot.

Doosan may not be finished yet. Over the weekend, the Bears have an easy run of games while the top three teams take on each other.

On Thursday and Friday, the Bears face the ninth-place Kia Tigers, trailing over 20 games behind the first-place KT Wiz. Meanwhile, the second-place Samsung Lions and third-place LG Twins will face each other. Then, on Saturday and Sunday, Doosan will face the last-place Hanwha Eagles while the Twins take on the Wiz and the Lions take on the Dinos.

Once the dust settles on those series, the Bears could be a lot closer to chipping away at the seemingly unassailable lead that the top three clubs hold.

To make matters worse, Doosan is among the clubs with the most games left to play. As of press time — before Thursday's games — Doosan have 34 games left to play, the same as the Dinos. Only the Tigers and Twins have more — 35 each. The first-place Wiz only have 32 left to play, while the second-place Lions are in a very weak position with just 27 games left.

The Bears aren't the only apex predator making a sudden rush up the KBO table. Despite currently being stuck in a four-game ski, the reigning champion Dinos have been steadily inching their way into playoff contention over the last month after dropping out of the top five fairly early in the season.