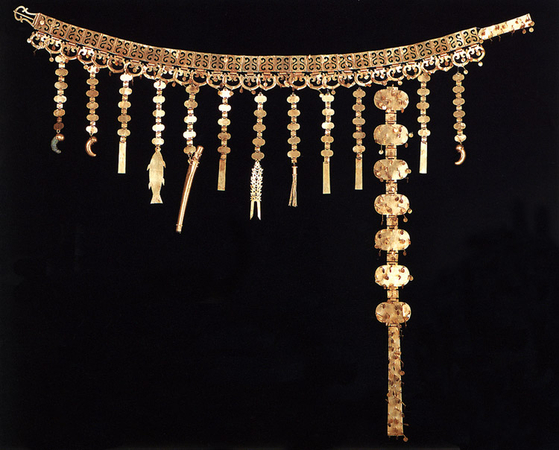 A belt made of cloth is called gwadae.

Attached to the belt are rectangles made of metal.

This Korean gwadae influenced by China is decorated with valuable objects such as jadeite and commodities such as a small knife, a case for drugs, a whetstone, a flint and tweezers.

According to lessons of formality called Yegi from China, when descendants performed the ancestral rites, on the left side of the belt there should be a towel, a grindstone, a small cup and an iron flint.

On the right side are a set of bone instruments called gyeol (worn on the thumb and used in archery), an instrument called gwan which is used to suspend strings on a bow (in archery) and a large cup.

The color, number and material of the belt represented the wearer's government posts in the Baekje (18 B.C.-660 A.D.) and Silla Dynasty.

Exhumed from the North Tomb of Hwangnam-dong, Gyeongju-si, Gyeongsangbuk-do Province, the golden belt is 120 centimeters (47 inches) in length, and yopae, which is worn with the gwadae, is 22.5 to 73.5 centimeters in length.

This belt consists of 28 links.

There are small holes around the edge of the leather belt.

The 13 yopae hang from the base of the belt connected by a hinge.

The yopae are considered valuable for research for they determine how the belt was worn and used.

Hwangnamdaechong is located at the ancient tomb park of the Michuwangneung Royal Tomb District, in the Silla Dynasty.

Its serial number is 98, and was one of Silla's tombs before the Unified Silla Era.

It was named to Hwangnamdaechong (Hwangnam great tomb) since it has been excavated twice, once in 1973 and again in 1975.

The overall formation takes the shape of a gourd dipper as shown by the connection of the two round shapes going north and south.

This is the largest tomb made during the Silla Dynasty which features clay on the outside and stones.