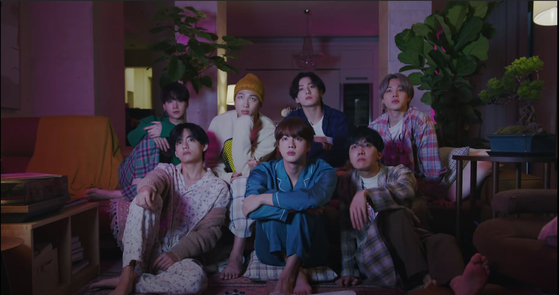 A scene from the video teaser of "Life Goes On" featuring the BTS members in pajamas. [SCREEN CAPTURE]

The song is one of eight on "BE (Deluxe Edition)," which includes chart-topping "Dynamite" and is slated to drop on Nov. 20. The teaser is very brief — less than 30 seconds — featuring the members first around a campfire then in pajamas sitting in front of a TV as if they are just about to watch the music video together.

The teaser video, according Big Hit Entertainment, was directed by Jungkook, a band member.

It's difficult to tell much about "Life Goes On" from the teaser, but the fans already got a glimpse of the lyrics last week, as some lines were released last week by Big Hit. It goes something like: "Like an echo in the forest/ Like an arrow in the blue sky/ On my pillow, on my table/ Life goes on like this again."

The song is produced by Pdogg, who wrote the song together with RM, Ruuth, Chris James, Antonina Armato, Suga and J-Hope. Big Hit Entertainment said orders for the album will be taken while the band performs "Life Goes On" at the American Music Awards on Nov. 22.

"Map of the Soul: 7," which was released early this year, went platinum. The Recording Industry Association of America (RIAA) certified the album platinum on Nov. 17, U.S. time, making BTS the first Korean artist to have two platinum albums in the United States. Their "Love Yourself: Answer" achieved the feat early this year.

Their "Map of the Soul: Persona" has gold certification as well as singles "Fake Love" and "DNA."