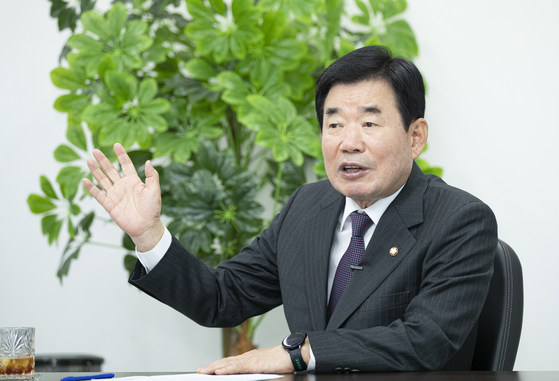 Ruling Democratic Party (DP) Rep. Kim Jin-pyo, the head of the Korea-Japan Parliamentarians' Union, speaks in an interview Tuesday at his office in Suwon, Gyeonggi, after his Tokyo trip last week. [LIM HYUN-DONG]

Ruling Democratic Party (DP) Rep. Kim Jin-pyo said he had been told in a meeting with a high-ranking Japanese government official in Tokyo last week that “if Chairman Kim has intentions to attend, a formal invitation could be made” through the Tokyo Organising Committee of the Olympic and Paralympic Games. The lawmaker made the remarks during an interview with the JoongAng Ilbo in his office in Suwon, Gyeonggi.

A seven-member delegation of bipartisan lawmakers led by Kim, a former deputy prime minister of finance and economy, returned from a three-day trip to Tokyo last Saturday. They met with the new Japanese Prime Minister Yoshihide Suga, along with politicians and lawmakers of the Japan-Korea Parliamentarians' Union.

Kim said the two sides generally reached a consensus on the need for cooperation to contain the Covid-19 pandemic and increase sports and cultural exchanges for a successful Tokyo Summer Olympics next year, and also to enable North Korea to attend the Games.

“Many people agreed when I proposed these three ideas,” Kim said, adding that Prime Minister Suga in particular expressed gratitude that Korea "is working on cooperation and exchanges for the success of the Tokyo Olympics” in their meeting last Friday.

The Korean lawmakers also met with Japan’s ruling Liberal Democratic Party (LDP) Secretary-General Toshihiro Nikai, a close associate of Suga; Yoshiro Mori, the president of the Tokyo Olympics organizing committee; and a high-ranking Japanese Foreign Ministry official to discuss ways for Korea and Japan to cooperate ahead of the Summer Games.

However, with North-U.S. and inter-Korean dialogue frozen and the coronavirus pandemic leading North Korea to lock down its borders, it is unclear if Pyongyang will be participating in the Olympics at all.

“North Korea’s participation in the Tokyo Olympics is of course possible,” said Kim. He noted that in categories like taekwondo, North Korea and Japan already made an agreement to hold a demonstration of their teams, like the joint inter-Korean taekwondo demonstration for the 2018 PyeongChang Winter Olympics.

He added, “Sports is not political and always has had a wide berth for cooperation, so it can be the best opportunity for [North Korea to return to dialogue] as well this time.”

According to Rep. Kim, the high-ranking Japanese Foreign Ministry official said that the organizing committee would extend a formal extension if North Korean leader Kim accepted, and Mori, a former Japanese prime minister, in turn said that if the North was okay with it, the committee would send an invite.

Rep. Kim stressed that it “is the will of the party, government and Blue House” that the Tokyo Olympics could serve as a breakthrough for inter-Korean and North-U.S. diplomacy.

President Moon took part in a virtual Asean Plus Three summit Saturday, which included the leaders of the 10 members of the Association of Southeast Asian Nations, as well as Chinese Premier Li Keqiang and Japanese Prime Minister Suga. Moon greeted Suga and said, “A pleasure to meet you,” which was seen as another indication of his intention to resolve bilateral relations and cooperate on the Tokyo Olympics.

However, the issue of compensation of Korean wartime forced labor victims continues to be a hurdle to resolving strained Seoul-Tokyo relations.

Suga was said to have told Kim he would like for Korea to provide “a progressed position on the forced labor issue for the sound development of Korea-Japan relations.”

Japanese media last month reported that Suga would not attend a trilateral summit hosted by Korea at the end of the year unless Seoul guarantees that assets seized by local courts from a Japanese company will not be liquidated. The process to sell off the seized assets follows the Korean Supreme Court decisions in 2018 ordering Japanese companies to individually compensate Korean victims of forced labor during World War II, recognizing the illegality of Japan’s colonial rule.

Kim said that if a new joint leaders’ declaration, as has been proposed by Park Jie-won, director of the Blue House National Intelligence Service (NIS) to Suga, is not feasible, another option would be freezing the forced labor issue until after the Tokyo Olympics next summer.

Park, in a visit to Tokyo earlier this month, proposed a new declaration similar to the one between then-Korean President Kim Dae-jung and Japanese Prime Minister Keizo Obuchi in 1998.

Kim said that everything that can be discussed between Korea and Japan has been discussed on the issue, adding, “All that remains is for the two countries’ leaders to make a choice and decision.”

He said, “It would be ideal if a decision could be reached through a Moon-Suga declaration, but if that is not possible right now due to opposing sentiments in each country, I proposed a freeze until after the Tokyo Olympics end, and Japanese political leaders also agreed.”

He added, "A successful conclusion of the Tokyo Olympics could increase trust between the two countries’ people, and the leaders can make a political decision then.”