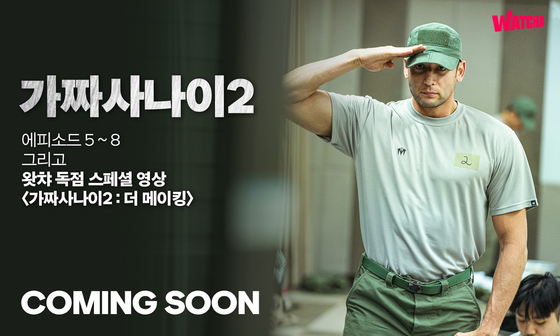 
New episodes of controversial military-themed web entertainment show "Fake Men 2" will air this week despite the recent criticism that brought the release of new episodes to a halt last month.

According to Watcha and Kakao TV, the fifth episode of "Fake Men 2" will be posted on Wednesday midday, followed by three additional episodes on Saturday to finish the 8-episode season.

A special episode titled "Fake Men 2: The Making," produced by Watcha, that deals with the behind-the-scenes making of the movie, will also be aired on Saturday.

The decision comes a month after Physical Gallery, the show's YouTube channel uploader, announced that it will not air episodes beyond the fourth one on Oct. 16, after its latest episode was bombarded with negative comments due to its overly violent content as well as controversy over instructor Logan and Jung Eun-ju’s private lives.

All previous “Fake Men” episodes are unavailable on the Physical Gallery YouTube channel, but available on Watcha and Kakao TV.