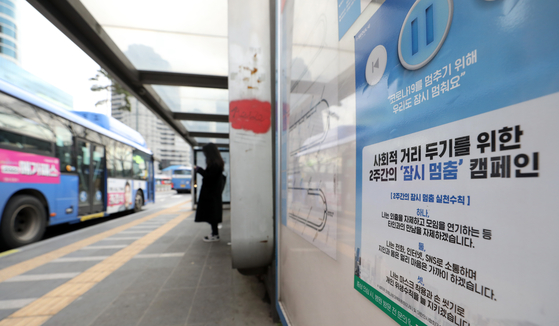 Starting Tuesday, buses are running at 80 percent of their normal frequencies after 10 p.m., as part of the Seoul city government's social distancing measures. Subways in the city will also reduce frequencies by 20 percent after 10 p.m., starting Friday. A sign is placed at a bus stop in central Seoul notifying the public of the reduction of buses. Level 2 social distancing recommendation is in place in the greater Seoul area starting Tuesday. [NEWS1]

People flocked to bars and nightclubs in Seoul Monday night, knowing many would be shut as the government ratcheted up the social distancing recommendation to Level 2.

Health authorities deemed bars and nightclubs that allow dancing in Seoul, Gyeonggi and Incheon high-risk businesses to be shut down starting Tuesday.

“I don’t know why we have to shut down when restaurants can remain open,” an owner of a bar that involves dancing near Moran Station in Gyeonggi told the JoongAng Ilbo Monday. “It’s not like the virus is selective.”

The bar was packed and people spewed out into nearby streets as the clock neared midnight.

Stores in entertainment districts feared a loss of business due to the heightened social distancing recommendation.

“Our customers are the same ones who go to the bars in this area,” said the owner of a convenience store near Moran Station. “When they lose their business, so will we.”

The government, which runs a five-tiered social distancing system, raised the distancing level in Seoul, Gyeonggi and Incheon, also known as the greater Seoul area, to Level 2 starting Tuesday, and Level 1.5 in North and South Jeolla and Gwangju.

Level 2 social distancing recommendation prohibits any events involving 100 people or more, and shuts down nightclubs and bars that allow dancing. Restaurants aren’t allowed to receive customers after 9 p.m., but takeout is allowed. Cafes can operate normal hours but can only serve takeout. Noraebang (singing rooms) and gyms are not allowed to operate beyond 9 p.m.

The decision to heighten the social distancing level was reached as Korea continued to see spikes in Covid-19 cases.

Monday marked the sixth day within the month when new cases surpassed the 300 threshold.

Korea added 349 new cases of Covid-19 infections on Monday, with outbreaks taking place in almost every major city and province.

The Korea Disease Control and Prevention Agency (KDCA) said Korea recorded 320 domestic cases and 29 imported cases on Monday. Among the domestic cases, 132 were located in Seoul, 69 in Gyeonggi, 45 in Gangwon, 16 in Incheon and 14 in North Jeolla. All major cities and provinces except Daejeon recorded additional cases Monday.

Under the Level 2 restrictions, some restaurants and bars that have no dancing have opted to open earlier.

“We’ll be opening from 3 p.m. instead of 5 p.m. to try to counter our losses because we’re forced to close from 9 p.m., our prime time for business,” the owner of a pub near a university in Suwon, Gyeonggi, told the JoongAng Ilbo on Monday.

Under the Level 2 system, churches are allowed to hold services but only with up to 20 percent of its seats filled. All gatherings after services at churches have been prohibited.

Sports arenas can only fill 10 percent of their seats.

Elementary and middle schools are recommended to have only one-third of the student body present in classrooms at a time. High schools can have up to two-thirds.

Hagwon, or cram schools, that can ensure that students are at least 2.8 meters (9.2 feet) apart from each other can operate beyond 9 p.m.

Seoul has added its own stipulations to the Level 2 recommendations, as local governments are allowed to. Starting Tuesday, buses are running at 80 percent of their normal frequencies after 10 p.m. Subways in the city will also reduce frequencies by 20 percent after 10 p.m., starting Friday.

Visits to nursing homes in the city have been banned altogether. 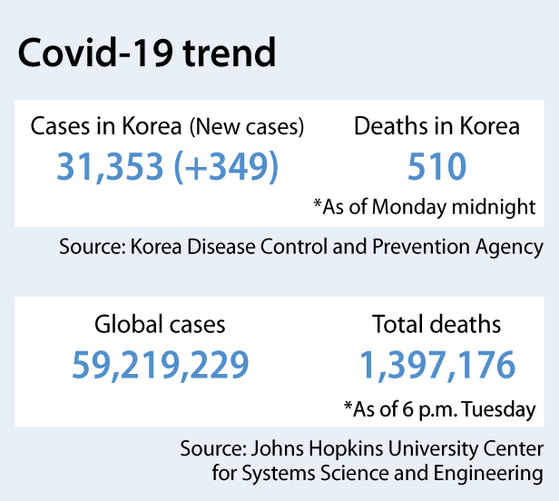 While many companies have canceled end-of-year parties in light of the new restrictions, some have been searching for other options.

“We’ve had incessant calls inquiring after available function rooms for the end of the year,” a manager of a hotel in Suwon, Gyeonggi, told the JoongAng Ilbo. The hotel, which offers noraebang facilities and swimming pools, is fully booked through the end of December.

Ferries are another popular choice for end-of-year parties. A website to book dinners and parties on ferries on the Han River showed that several slots from Christmas to New Year's Day were sold out by Tuesday.

“It’s a worrying sign,” Kim Woo-joo, a doctor in the infectious disease department at Korea University Guro Hospital, told the JoongAng Ilbo. “Social distancing recommendations work only when citizens abide by them. It will help the whole society if everyone keeps a 2 meter distance from each other and reduces their meetings to 15 minutes max."

Daily infections of Covid-19 had remained in the double digits for most of October. Late in the month, they went into triple digits due to clusters in nursing homes.

Since then, outbreaks have been taking place sporadically involving schools and meetings among friends, relatives and companies.