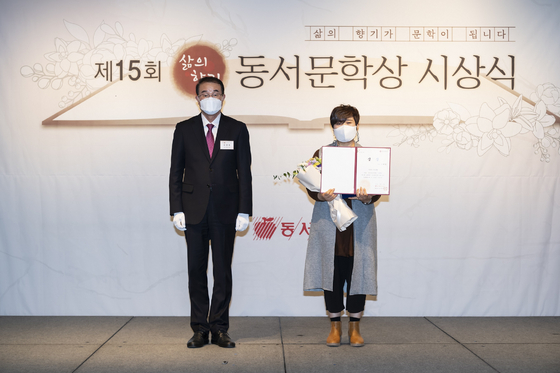 Held for the 15th time this year, Scent of Life is the largest literature awards event in Korea focused on female novelists, Dongsuh said. It was launched in 1978 for the first time as an essay contest.

This year, a total of 18,631 pieces were submitted between May 25 and Oct. 5. The finalists were selected after three rounds of judging.


The grand prize went to Kim Hye-young’s “Jayeom." In the novel, the protagonist reminisces about their late father and the days watching him stubbornly working to preserve an ancient and difficult tradition of producing salt from mud flats.

“It’s an honor to win Dongsuh’s literature prize,” Kim said during the awards ceremony held at the Westin Chosun Hotel in Jung District, central Seoul. “I will think of this prize not as a destination, but part of a journey in my literary career to become a writer who can add prestige to this award.”


The gold prize went to Choi Kyung-shim’s poem “The Zebra-winged butterfly and my father,” Cho Hyun-sook’s essay “The power of jars” and Joo Mi-seon’s “Tto Tto."

Dongsuh gave out a total of 79 million won ($71,000) in prize money to the 484 winners. Grand prize winner Kim took 10 million won. The grand and gold prize winners will also have their work published in a monthly literature magazine published by the Korean Writers Association.