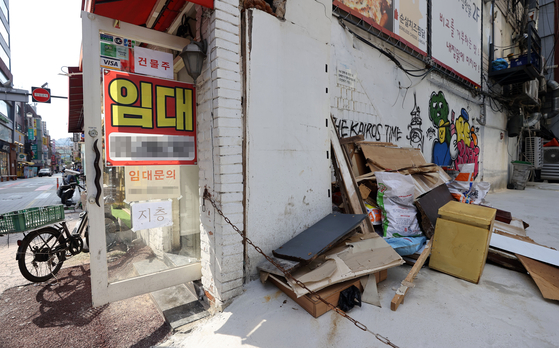 Over 20,000 commercial businesses in Seoul, such as restaurants and PC cafes, shut down during the second half of this year in the aftermath of the Covid-19 epidemic. In this file photo, signs are posted on a building in Sinchon, western Seoul, to find new tenants. [YONHAP]


As the country approaches the one-year mark in its battle against the Covid-19 epidemic, changes triggered by social distancing guidelines have laid bare inequalities in Korean society. While the lives of some have been less disturbed by the “new normal,” others — including self-employed workers, caregivers and young children without family members to help with their online education — are increasingly at risk of being left behind.

Shortly after Korea's Covid-19 epidemic began in February, the government advised that those who are able to work remotely should do so. While many corporate office workers and public servants benefit from the work-from-home system with nearly no change in their salaries, self-employed people and small-business owners said their workloads have increased while their incomes have taken a substantial hit.


“My workload increased so much, but sales went down greatly,” said the owner of a cafe in central Seoul, surnamed Lee. “We had to disinfect tables and chairs all day long, whenever guests leave. We ventilated the store all day long, took temperatures of customers and kept visitors' logs.” 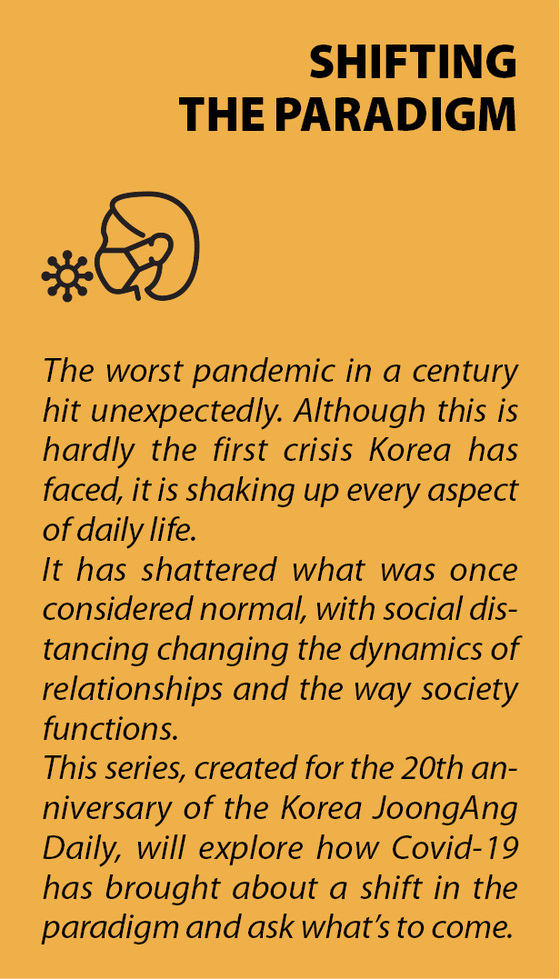 Lee said her business started delivery services after the pandemic, but it wasn't easy to get it up and running.

“It was complicated to register our store on delivery apps and online payment services,” she said. “The process also involved many bureaucratic steps, such as getting certificates and documents from the district office. I am not digitally savvy, but I am not digitally illiterate either. But making the change abruptly was hard.”

The government subsidy and loan were helpful, but they were too small, Lee added. “What we need is a tax cut,” she said. “I have operated this cafe since 2004. When MERS [Middle East Respiratory Syndrome] hit, infections spread in 2015, people stayed home and sales plummeted. But that was just a short period. This crisis is for far longer. I am just doing my best to keep this business alive.” 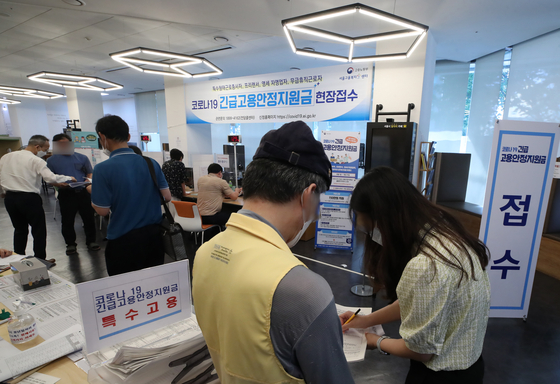 In this file photo, micro-business owners, freelance workers and unemployed people line up at the Seoul Employment and Welfare Center in Jung District of central Seoul to apply for emergency loans on June 22. The government offered 1.5 million won ($1,360) of emergency loans each to vulnerable populations. [YONHAP]


Seong Yeong-mi, who has owned a travel agency for decades, said she had to give up her business two months ago. Her family invested its entire wealth in the agency a few years ago, she said, at a time when trips to Europe — and particularly Nordic countries like Iceland — had become increasingly popular in Korea.

“Everything crumbled instantly after Covid-19 spread,” she said. “The longer we leave the business open, the more we lose. I had no other choice. We even sold our apartment to repay the loans before shutting down the business.”

In contrast, Lee Su-jin, an office worker for a conglomerate, said she was able to work from home.

“I'm grateful that I receive the same salary, as I see gloomy news about layoffs and bankruptcies day after day,” she said. “I am also thankful that I live alone, with no family or child to take care of.”

After the Covid-19 pandemic started, the government delayed school openings and moved classes online. Only after social distancing guidelines were eased to the lowest level, the Education Ministry announced that it would raise the cap on students attending physical classes to two-thirds of capacity for all grades, on Oct. 19.

Parents worry that months of online classes have created a learning gap.

A 37-year-old mother said her daughter, a first grader, cannot turn on the TV alone, sit through the online lecture or complete homework without help.

“An adult has to be there to supervise and support her, but my husband and I both work,” she said. “This was unrealistic. I am afraid she would be so far behind other kids whose parents were there to help them.”

“When schools offer online classes, learning gaps are inevitable,” an elementary school teacher from North Chungcheong told the JoongAng Ilbo. “Students will be in different situations depending on where they live, which schools they attend, who their teachers are and how their families support them. The government has to come up with a resolution to reduce this learning gap.” 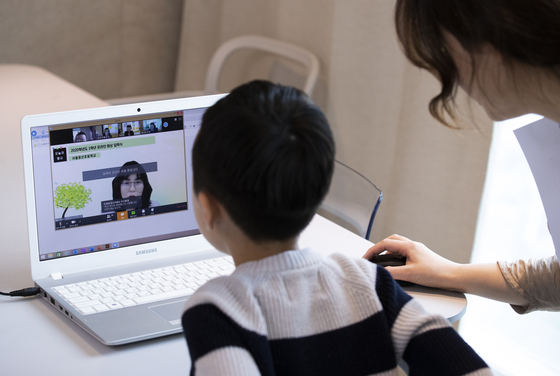 In this file photo, a first grader at Yongsan Elementary School looks into a computer screen with the help of his mother from their home in Yongsan District of central Seoul on April 20, 2020. [YONHAP]


Some parents have let their frustration be known to the Blue House.

“Under the government’s strategy of online school, my child was just watching YouTube and trying to teach himself something,” a third-grader's mother wrote in a petition she filed with the Blue House’s website in early September. “Children in the public education system are practically having a yearlong vacation this year. Public education has abandoned our children.”

Her petition, which as of early September had received 34,000 signatures, added, “Please do not neglect our children and offer real, substantive online lectures."

A civic group, World With No Worry for Private Tutoring, said it has conducted a survey of 1,501 students, teachers and parents last month about online lectures offered by public schools. According to the survey, 63 percent said they were not satisfied with the classes offered during the first semester.

“We are now seeing a new kind of education gap,” Shin So-young, a researcher with the civic group, said during a conference hosted by the Seoul Metropolitan Government on Oct. 7.

“After the pandemic, a new type of private education business started. Students go to cram schools in the morning, when they were supposed to be at schools, and the cram schools manage the students to follow online classes offered by their public schools.”

Private cram schools, or hagwons, have been allowed to operate throughout the pandemic, including when public schools shifted to online-only classes. They are, however, required to follow social distancing guidelines including allocating a gap between desks, ensuring mask-wearing for indoor activities and limiting the number of students in class.

Children from families that cannot afford this type of new service can fall behind, she said.

And children with developmental disabilities face significant difficulties in the switch to online classes.

“Online class requires self-management ability,” said Park Hyeon-ok, a professor of special education at Baekseok University. “Children with developmental disabilities are especially weak in that part, so parents must support them. They will inevitably have a learning gap under these circumstances.”

She said the government should offer a nationwide system modelled after that of the Gyeonggi Provincial Education Office, in which teaching assistants visit the homes of children with learning disabilities to support their online class participation.

She added that the online classes are only a stopgap measure for the children with developmental disabilities.

“They need face-to-face classes,” Park said. “It can be at school but it can also be at home. Because the number of students with special needs in one class is far smaller than that of regular classes, the government must come up with a safe way to resume face-to-face classes.”

According to the Presidential Committee on Job Creation, caregivers are essential employees for the country. Teachers at child care centers, social workers, nursing assistants, caregivers for the elderly and those with disabilities and supervisors of after-school programs offer services that require close contact despite the pandemic, the committee said. 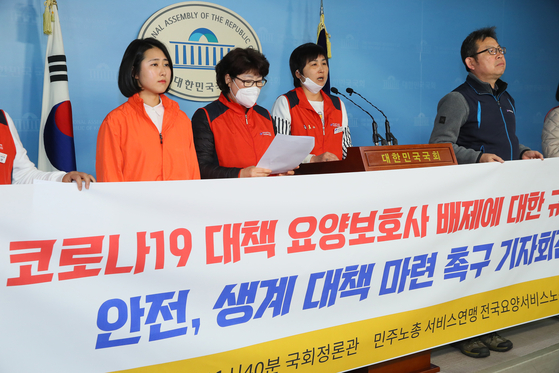 A group of caregivers for the elderly hold a press conference on March 9, 2020, at the National Assembly to urge the government to come up with measures to ensure their job safety and health protections. [YONHAP]


As of 2019, the country has about 1.1 million caregivers currently employed, accounting for 4.6 percent of the working population. While the number of caregivers is growing fast, the jobs are mostly held by elderly women, while pay is low and job security is uncertain.

And while many families have taken on the burden of caregiving in the home, many caregivers have lost their jobs.

Since the pandemic started this year, 20.8 percent of caregivers for the elderly said they have stopped working, according to the Seoul Metropolitan Government’s survey. Among that group, 82.9 percent said they were forced to stop working at the request of their clients, and 72.4 percent said they had received no salary during that period.

According to the committee, 240,000 teachers were employed at 37,000 child care facilities nationwide in late 2019, of whom 71 percent were hired by private centers. Since the pandemic struck, many child care centers have suspended their operations or shut down their businesses.

There are also an estimated 130,000 caregivers working at 8,317 group homes for people with disabilities, mental institutions and orphanages, as of October 2020. Some of them have been the sites of cluster infections, prompting officials to place the facilities under cohort isolation. Along with the inmates of the facilities, caregivers were also isolated together, but they failed to receive proper compensation, the committee said.

The committee said legal grounds should be established to recognize caregivers as essential workers to offer them proper treatment during the pandemic. The government was advised to introduce a temporary pay system for caregivers who lost jobs due to the pandemic, modeled after those of some European countries, such as Germany. 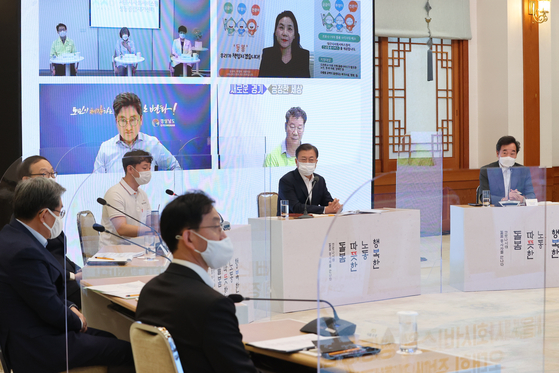 President Moon Jae-in, second from right, holds a virtual meeting with caregivers to listen to their suggestions on Oct. 8, 2020. [YONHAP]

“Amid the pandemic, caregivers play a crucial role for our society to function,” said Kim Yong-ki, the committee's vice chairman. “Their jobs must be re-evaluated and their working conditions must be improved.”

Some elderly residents also struggle to overcome the digital divide, and note that their everyday lives have become more difficult as the government's response to the pandemic forces them to navigate unfamiliar technology.

“When I went to buy bread last month, they suddenly asked me to use a QR code,” said Kim Mi-yeong, 61. “I asked what it was, and the bakery worker let out a sigh. I was mortified, and asked my daughter-in-law later about what it was. She did something with my phone and explained it, but I still cannot figure out what she did. I am not going back to that bakery.” 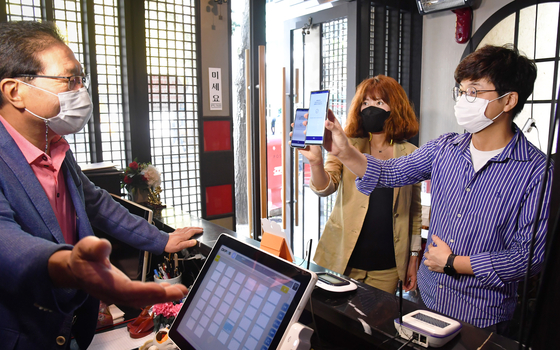 Seoul Metropolitan Government workers, right, hold a demonstration of using QR code identification with their Zero Pay apps on their smartphones at a restaurant in Jung District, central Seoul, on Sept. 18, 2020. [YONHAP]


Kim also said her family adamantly told her to stop going to crowded markets for grocery shopping. Over the past months, she has often relied on her daughter and daughter-in-law to order food ingredients and other goods through online shopping.

“I wanted to learn, but it was so complicated. They said it's more convenient and cheaper, but I'm not sure. I just feel uncomfortable that I have to ask them every day about buying every little thing.”