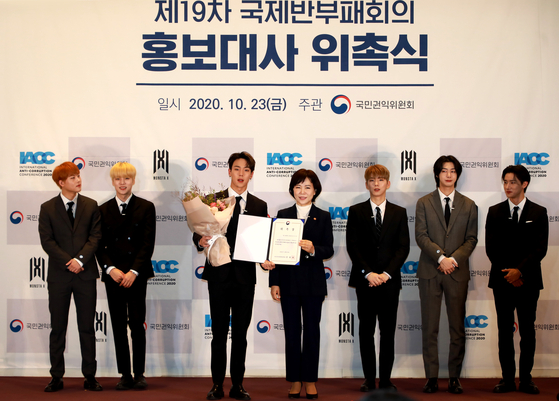 The Korean government will virtually host the world’s largest anticorruption conference this week, with thousands of people from more than 100 countries expected to gather online for discussions on justice.

The Anti-Corruption and Civil Rights Commission (ACRC), on behalf of the Korean government, will host the 19th International Anti-Corruption Conference (IACC) from Tuesday through Friday alongside Transparency International (TI), a nongovernmental organization that annually ranks countries by their Corruption Perceptions Index (CPI).

The ACRC said in a release earlier this month that the four-day conference, themed “Designing 2030: Truth, Trust and Transparency,” will include participation from over 500 speakers from numerous foreign governments, civil society groups, academia and media outlets, with all programs streamed on the IACC’s official website for viewers to watch from home.

The IACC is normally held every two years. The last time Korea was the host country was in 2003, when the conference was in its 11th year. The ACRC said it’s the first time the IACC will be held online, as the coronavirus pandemic rages on globally.

This year’s conference was originally scheduled to kick off last June at Coex in Gangnam District, southern Seoul, but was delayed to December and relocated to Bexco in Busan as coronavirus infections began to surge. Last September, the ACRC announced it would be held virtually, with a makeshift studio set up in Coex.

Panelists in Korea will join the plenary sessions in person at the Coex studio, while foreign speakers living abroad will participate virtually from their homes or offices. Workshops and other events will run on the sidelines.

All plenary sessions, workshops and side events will be streamed on the 19th IACC’s official website (www.iacc2020.kr), mostly live. Simultaneous translations will be provided for every plenary session in all six official languages of the United Nations — English, Spanish, French, Russian, Chinese and Arabic — plus Korean. For the workshops, those translations will be provided only in English and Korean.

The website will remain open until the end of 2021, enabling users to watch conference videos, download materials and post their reviews, the ACRC said. General viewers will be allowed to leave comments and inquiries in real-time chats alongside each video on the IACC website.

The ACRC will separately stream live shots from the Coex studio via its official YouTube channel (www.youtube.com/acrc0229), with no simultaneous interpretations provided.

The opening ceremony will be held at the Coex studio on Tuesday at 8:30 p.m.

A pre-recorded special session featuring Harvard Prof. Michael J. Sandel, a world-renowned philosopher and author of the 2008 bestseller “Justice: What’s the Right Thing to Do?,” is scheduled to be uploaded to the IACC website on Wednesday at 2 p.m.

According to an IACC preview from the ACRC, Sandel will first talk about the nature of society in light of the Covid-19 pandemic, followed by the negative effects of market liberalism and meritocracy, the renewed need for the common good and how civic awareness and actions can build a just society. The talk will be moderated by Kim Sun-wook, a philosophy professor at Soongsil University in Seoul.

ACRC Chairperson Jeon Hyun-heui will subsequently talk about anticorruption and integrity, how the Korean government is trying to eliminate unfairness and privileges in society and the value of truth, trust and transparency demonstrated during the pandemic.

Both Sandel and Jeon will take questions from members of the public who were chosen by the ACRC in an online public contest to select the best questions.

The first plenary session titled “Designing 2030: Truth, Trust and Transparency,” will be held Tuesday at 9 p.m. The other plenary sessions will cover the following topics: new strategies for transparency to establish peace and social justice; new integrity strategies for a trust-based society; efforts to uncover the truth in the face of fake news and manipulation; collective action for trust and integrity; breaking the vicious cycle of corrupt money and impunity; and setting agendas for truth, trust and transparency in 2030.

Some 100 workshops will be held on the sidelines, touching on a broad array of subjects including financial integrity, artificial intelligence, blockchain, climate change and resource management.

The ACRC said in the preview that it plans to organize two workshops to introduce Korea’s experiences of sharing its best practices of integrity with foreign countries, and to discuss with the international community the importance and implications of transparency and trust demonstrated in the so-called K-quarantine model during the pandemic.

Other sideline events include concerts and movie screenings.

The closing ceremony will be held on Friday at around midnight.