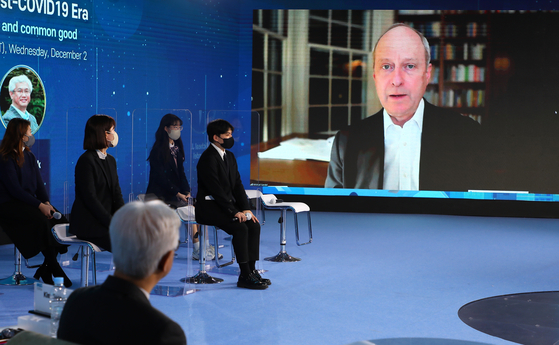 Harvard Prof. Michael J. Sandel, author of the 2008 bestseller “Justice” and the recently published “The Tyranny of Merit,” talks about justice during the International Anti-Corruption Conference. [Anti-Corruption and Civil Rights Commission]

Harvard Prof. Michael J. Sandel, author of the 2008 bestseller “Justice” and the recently published “The Tyranny of Merit,” highlighted the need to rethink the economy in how it rewards and recognizes workers who make the greatest contributions to the common good, saying the Covid-19 pandemic has shed fresh light on deeply entrenched inequalities in today's workforce and society.

“We have come to realize how deeply we depend on workers we often overlook — the workers in hospitals, of course, but also delivery workers, truck drivers, grocery store clerks [and] health care providers,” Sandel said during a special session of this week’s International Anti-Corruption Conference (IAAC).

“Often these workers are not the best paid or the most respected workers, and yet, now we recognize them as essential workers. So part of my message is this could be a moment to rethink our economy in the way we reward and also in the way we honor and recognize workers who may not have high, prestigious credentials, workers who may not have attended university even, but who nonetheless make valuable contributions to the common good.”

In the session, which was pre-recorded and aired on the IACC’s website (www.iacc2020.kr) Wednesday afternoon, Sandel also touched on deepening inequalities in the United States and Korea on the college admissions front, saying kids from affluent families had better chances of getting into prestigious universities because they had better access to cram courses and tutors from a young age.

Education systems that make almost every young person think first and foremost whether one’s future career will depend on being admitted to top universities are another critical issue to tackle, he stressed, because they tend to put intense pressure on students in the years leading up to college “in terms of morale, their spirit, their psychological well-being,” and can cause depression, anxiety and even suicidal ideation.

Kids should instead be able to step back and reflect on the “intrinsic values of higher education,” said Sandel, such as what’s worth caring about, what they want to study and what their true passions are.

Luckily for Korea, the country seems to have some hope for creating a fairer society, Sandel said, because it’s more honest and self-critical about the unfairness and inequality of opportunities. His comment came in response to a survey mentioned by Kim Sun-wook, a philosophy professor at Soongsil University in Seoul, who moderated the session and said only one in 10 Koreans think upward mobility is possible.

Sandel said similar surveys conducted in the United States show Americans are more optimistic about opportunities to rise and for their efforts to be fairly rewarded, which in his opinion seems to show Americans are “unrealistic” and fail to realize the important work that remains to be done in creating a more equal society where everyone truly has equal opportunity.

“Koreans recognize the unfairness and inequality of opportunity that exists, and so in some ways, this is the first step toward bringing about a more fair society,” he said.

On leadership, the Harvard professor said that the best-educated politicians don’t necessarily create better policies and a wiser government because very often, those with the best education from the best universities “may be good in economics but may not have very good practical judgement,” and may not understand the life experiences of people from different social and economic backgrounds. They also may lack understanding of the historical context that makes a difference in policies.

“Practical wisdom is not something you can learn only from books,” he said. “Practical wisdom involves sound judgement, involves human wisdom, it involves the ability to identify with the common good including with the struggles of people who may not come from the most affluent families or parts of society.”

Sandel continued, “I think what we’ve seen in recent decades is a tendency to rely on technocratic expertise as if it were a substitute for wisdom and good judgement.”

Sandel’s session about justice was part of the 19th IACC, the world’s largest anticorruption conference held every two years. This year’s conference launched Tuesday on a virtual format due to the Covid-19 pandemic, and is planned to wrap up Friday. The Anti-Corruption and Civil Rights Commission is hosting the event on behalf of the Korean government, alongside Transparency International, a nongovernmental organization that annually ranks countries by their Corruption Perceptions Index.